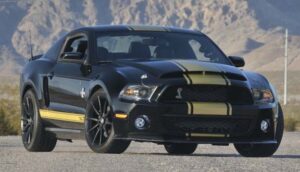 Carroll Shelby is the Energizer Bunny of the automotive world.  He’s had his heart and any number of other vital organs replaced over the decades but keeps on ticking – his car company, Shelby American, continuing to roll out new products.

A half-century after making a name, first as a race driver, and then as the producer of the legendary Shelby Cobra, Shelby American is getting ready to celebrate with a 50th Anniversary Tour – and the launch of three new versions of the Shelby-tuned Mustang.

It is, the maker noted during an appearance in Detroit, the first time it unveiled a new product at a conventional auto show.

“The golden anniversary is a remarkable milestone,” said John Luft, president of Shelby American, “many people did not think this company would make it that long.”

The maker’s news conference at the Detroit Auto Show features three flavors of Shelby, with news that only 100 copies of the Shelby GTS, the GT 350 and the GT 500 Super Snake will be built, half featuring the distinctive Shelby gold striping over black paint, the others going gold on white.

The new models will be offered in various trim, stepping to the 800-horsepower Super Snake package.  But all will feature special commemorative badging, custom interiors, unique wheels, 6-piston front brakes and a certified and registered VIN.

Clearly a sign of the times, Shelby officials contend they not only were able to deliver maximum horsepower, but even some unexpectedly good fuel economy numbers from the latest Shelby products.  The base V-6 hits 30 mpg, noted Shelby American’s Operations chief, Gary Patterson.  But, “to our surprise, with the supercharger it gets 34.”

For his part, Carroll Shelby may be most surprised to still be around, especially considering the heart condition that ended his racing career prematurely.  That sent him looking for a place to create a car he had in mind.

“We built the first Cobra in a rented garage and then GT350’s in an old hanger.  But our company is still here, manufacturing the best cars that I’ve ever made.  The next 50 years will be even better for Shelby American.”

Shelby’s association with the Mustang dates back to a call he got from Lee Iacocca in 1964 asking to see what might be done with the then-new Ford Mustang.  The result was the high-performance Mustang fastback.  The two men continued their relationship for decades.  But while Iacocca is only tangentially involved in the auto industry today, Shelby is still going, and going and going.

Paul A. Eisenstein, contributed to this report.