Scion Gets Your Drift 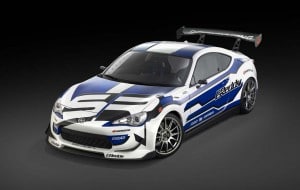 Scion will field a 600-hp version of the new FR-S in the Formula Drift series.

When Scion decided it wanted to take its new FR-S sports car out racing it decided it might not a few extra horsepower.  About 400 more to be exact, which is what it’s likely to take to  make the little FR-S competitive in the Formula Drift series later this year.

“Now we don’t expect that too many owners will take their FR-S to this level of extreme,” suggested Scion General Manager Jack Hollis, during a Detroit Auto Show press conference, “but we do know that like all Scion vehicles, it will be pretty hard to find one that is left stock.”

Meant to honor the classic Corolla GT-S, which Hollis says was “known by its true fans as the AE86 or “hachi-roku,” which means 8-6 in Japanese, the new FR-S is the product of a joint venture between Subaru and Scion’s parent,Toyota – which will market the roadster in other parts of the world as the Toyota GT86.

(Subaru will have it own version, the BRZ. Click Here for more.)

The Toyota and Subaru models debuted at the recent Tokyo Motor Show, Scion first showed its own take during a Hollywood news conference last month.

All three siblings will share Subaru’s 2.0-liter 4-cylinder boxer engine that delivers 200 hp and 151 lb-ft of torque. With a weight as low as 2,600 lbs, the power-to-weight ratio is likely to make the new models outperform far more powerful – but heavier competitors.

Ken Gushi will be driving the FR-S Coupe that in Drift trim generates 600 hp and 500 lb-ft of torque. The series takes off on April 6-7 on the streets of Long Beach, then makes a series of stops across the country.