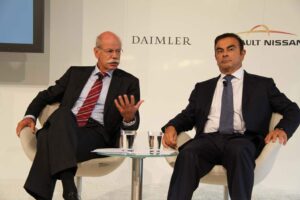 The rapidly expanding partnership between Germany’s Daimler AG and the Euro-Asian Renault-Nissan Alliance will take another step forward when the partners begin production of a new line of 4-cylinder engines in the U.S. in 2014.

Nissan’s current powertrain plant, in Decherd, Tennessee will eventually be capable of producing as many as 250,000 engines annually for use in both Mercedes-Benz and Infiniti models.  That factory, opened in 1997, already produces a mix of 4-, 6- and 8-cylinder engines for both the flagship Nissan and high-line Infiniti brands.

The decision to jointly produce engines in Decherd is the latest expansion of the Daimler/Nissan/Renault partnership initiated almost two years ago, and suggests that there may be further projects to come. When asked whether that might lead to a full-scale merger, Daimler CEO Dieter Zetsche said no, insisting the step-by-step strategy makes more sense for the three makers.

“We share the office and not the bed, and that works perfectly well,” Zetsche explained during a preview of the Detroit Auto Show. 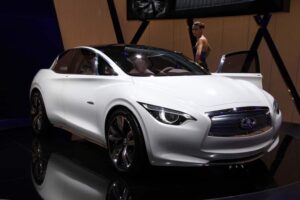 Mercedes will provide the premium compact platform for the vehicle Infiniti will base on its Etherea concept.

Asked why the two have decided to jointly build engines in the U.S., Carlos Ghosn, who serves as CEO of both Renault and Nissan, said, “Localized capacity reduces exposure to foreign exchange rates while rapidly enabling a good business development in North America – a win-win for the Alliance and Daimler.”

The choice of Decherd is no surprise as it is close to both of the U.S. assembly plants operated by Nissan, in Smyrna, Tennessee and Canton, Mississippi, as well as Daimler’s Mercedes-Benz plant in Tuscaloosa, Alabama.

Mercedes will begin using the new 4-cylinder engines in the C-Class built in Alabama, starting in 2014.

The announcement is the latest step in a targeted partnership between Daimler and the Renault-Nissan that was initiated in April 2010.  Gun-shy after its disastrous merger with Chrysler but needing a partner to help ensure greater economies of scale and share development costs, Daimler wanted to keep the tie-up small, at first, expanding on a project-by-project basis.

The decision to start sharing engines in Decherd reflects Mercedes’ need to reduce the impact of the strong Euro, which greatly magnifies the cost of key components until now imported from Europe.

“Through the strategic extension of our cooperation with Renault-Nissan we can realize near-market engine production in the NAFTA region on attractive economic terms and make optimum use of synergies arising from the cooperation,” Zetsche said.

When first launched, the partnership focused on three projects:

Since their alliance was announced, however, several other projects have been added.  Mercedes will provide batteries, Renault electric motors, for various electric vehicle programs they are working on.  And the new Mercedes-Benz small vehicle platform will be used for a premium compact that Infiniti will bring to market in 2014 based on its Etherea concept vehicle.

The partners insist their alliance works because there is very little cross-shopping between their various brands.  But by sharing in the development and manufacture of underlying components they expect significant cost savings.

Following a news conference in Detroit, Zetsche told TheDetroitBureau.com there are no plans for the three partners to increase the modest cross-holdings they announced when their joint venture project was first announced two years ago.  But still more projects could yet be in the offing, according to insiders.