$2.0 bil factory will support growth across the Americas. 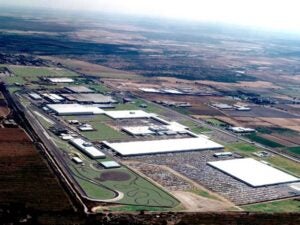 Nissan targets 85% "localized" production with the addition of a new plant in Mexico and another in Brazil.

Nissan will invest $2.0 billion in a new Mexican assembly plant complex intended to support its rapid growth plans across the Americas, with the factory scheduled to produce as many as 175,000 subcompact cars a year when it opens in 2013.

The new complex will complement Nissan’s two existing operations “South of the border,” and bring to 13,500 the number of workers the Japanese maker employs in the booming Mexican auto industry. That doesn’t include th e9.000 additional jobs it is expected to create in the country’s parts making network.

A new supplier park will be built on the site of the Nissan plant, which will go up in Aguascaliente, one of the centers of Mexican automotive production., and many of those additional jobs will be located there, Nissan officials noted.

The latest announcement comes just months after the maker revealed plans to erect another new factory in Brazil, one of the world’s fastest-growing automotive markets.  That $1.8 billion project is aimed at helping Nissan double its share of the Brazilian market over the next five years.

“Together with our new plant in Brazil, this new manufacturing facility in Aguascalientes is an important pillar in our strategy to ensure that Nissan has the capacity it needs to increase sales volume and market share across the Americas,” explained Ghosn, in a prepared statement.

Nissan was notably the only member of Japan’s Big Three to post an increase in both sales and market share in the United States for 2011.  And for the Americas, as a whole, its sales outpaced the ongoing recovery last year, surging 17.2%, to 1.561 million cars, trucks and crossovers.  The maker pushed past Honda to become the second-largest Japanese brand in the Americas, with a collective share of 7.5%, up from 7.0% the year before and just 6.6% in 2009.

The new Aguascalientes facility will be developed in several stages, according to Nissan, but the first stage will see the start of production by “late 2013,” the factory initially focusing on the small “B” platform products, such as the Nissan Versa, that dominate demand in much of Mexico, Central and South America.

Last year, the maker set a corporate record for its two existing Mexican plants, hitting production of 600,000 vehicles.  But the goal, with the addition of the new complex – the second Nissan facility in Aguascalientes, is to reach the 1 million mark “in the midterm.”  With its two existing Mexican plants running at capacity, that would suggest the longer-term goals for the new complex will be much more than the 175,000 unit output envisioned for the first phase.

While he would not confirm long-term goals, Nissan Americas Vice Chairman Bill Krueger acknowledged that “Obviously, there will be room to grow.”

While Nissan has not revealed specific details of its plans for the newer of the two factories in that city, the existing plant already supplies both Latin American and U.S. dealerships, and a spokesman indicated the new line will also serve markets both “north and south.”

Nissan’s Mexican production includes the March, Sentra, Versa, Tiida, the historically popular Tsuru, as well as the NP300 light trucks. Seventy percent of production is exported to 100 international markets. Approximately, 80 percent of vehicle content is made in Mexico. The company currently sells 22 vehicle nameplates in Mexico from its global vehicle portfolio.”No other automaker is investing in Mexico more than Nissan,” said Jose Munoz, president and general director, Nissan Mexico.

“Nissan’s investment in new manufacturing, engineering and technology resources in Aguascalientes validates what thousands of our employees, suppliers and customers already know. Behind our market leadership is an unparalleled commitment to deliver the best vehicles for Mexico and more than 100 international markets.”

With its low wages and central location, Mexico has become a major production base for much of the auto industry, with a wide range of manufacturers operating within its borders.  That includes all three of the Detroit-based manufacturers and a number of other Asian and Europeans, including Honda, which recently announced plans for its own new Mexican factory.

Audi, meanwhile, is reportedly giving serious consideration to putting up its own assembly plant there, though it is alternately considering options in the States, as well.

Nissan’s Mexican operations have long served to supply the entire length and breadth of the Western Hemisphere, a growing challenge as markets to the north recover and Brazil continues to boom.  The new factory in the state of Rio de Janeiro will be Nissan’s first in that market – though its European alliance partner, Renault, already has a presence there.  The new Nissan plant will go into operation in 2014.