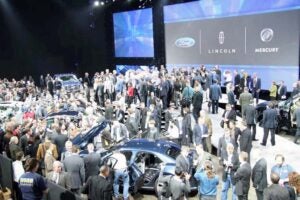 The hordes descend. There'll be thousands of media at the coming week's Detroit Auto Show. And they'll be collecting countless media kits.

This is my homage to the annual deluge of Car-of-the-Year awards that will be raining down on us, notably including the widely-watched North American Car and Truck of the Year ceremony that will usher in the Detroit Auto Show on Monday morning.

In recent weeks, you’ve undoubtedly noticed a deluge of ads quoting one or the other of these awards and you can be certain the winners of the two NACTOY trophies will be backing up their victories with some hefty media dollars. 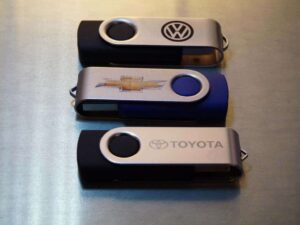 Today's media kits have gone high-tech -- and all-too-often quite easy to forget or lose.

For years we’ve schlepped or been mailed, FedEx’ed or hand-delivered media kits packed in binders, special edition books, little, big and huge boxes, cartons, envelopes, lunch boxes, tool kits, video cases, fancy disks, simulated cameras and other transportation contrivances. All for the same purpose: provide a treasure chest of vehicle information and future ephemera of vehicle data, information, releases and photographs.  Many have been examples of expensive excess, others simple and effective, some a combination of the two.

But that was then. Today it’s the ubiquitous, albeit small and easy to lose USB device. Some auto companies have opted for the traditional, sometime mundane but practical and easy to use thumb drive.

While others have opted to use different and distinct USB memory sticks in various shapes, colors, formats and designs. All of which provide the exact same information without the destruction of trees. But there are questions: Is more, more? Or is less, more?  Does it relate to the vehicle? Or not?  Is it odd for the sake of being odd? Or just different?

All the flash drives I received this past year have been saved for the purpose of the “Memorable Media Carriers of the Year” award for the recent  2011 press kits. 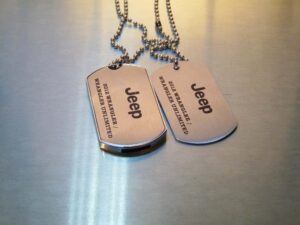 Jeep division for their classy interpretation of the dogtags worn by service men and women during WWII when the first Jeep was introduced.

Hyundai’s asterisk kit which began as a symbol of the brand’s 40 mpg ratings without an asterisk other competing brands used to denote special editions which reached the 40 mpg goal. .  (insert JPEG P1020551 Hyundai)

Fiat’s Abarth wooden box kit (only 500 were presented at the LA Show — mine is #496) while harkening back to yesteryear excess, did resemble the large box set used to present the new scorpion of the little car. And the flash drive was the Scorpion logo in chrome. (Insert JPEG P102058 Abarth box closed and JPEG P1020565 box open) 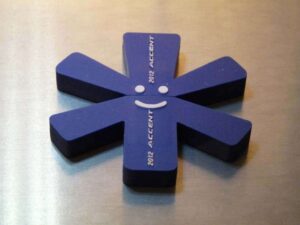 Kia’s miniature iPad screen delivered pix of the various models with a push of a button. Really cool.

Bamboo is a natural material that was used last year by Nissan, Lexus and Kia to show media types their vehicle is going good for the environment.

Ford’s Explorer has to make Hot Wheels fans smile and the Hyundai Veloster is as quirky and clever as the car itself. 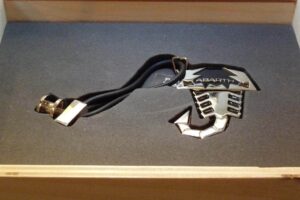 Believe the Nissan key fob was first to be received, while the Mazda fob was given out at the LA Show. Same basic idea, just different executions both effective. 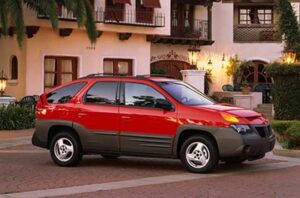 Where are all the "new" Azteks coming from?

Where in hell are all the Pontiac Azteks coming from?

From 2001 to 2007 GM dubiously produced 108,449 Aztecs – voted the ugliest car ever by Time magazine and most automotive writers.

Yet this ugly vehicle seems more prominent then ever when on the road. Oddly it doesn’t look quiet as ugly now.  Quietly, I sent out discreet inquiries to family, friends and fellow writers to learn if they’ve had a sudden infestation of Aztec’s. Not everyone said they have but I did receive reports of ‘showroom new’ Aztecs appearing on the roads in Detroit, Los Angles, San Diego, Portland, Houston, Raleigh, Oklahoma City and Omaha.   Odd? Yes. Strange? Definitely. Peculiar? Certainly.

But the question remained: Where in the hell are they coming from?

After some investigation and confirmation from reliable sources, there is a reoccurring, perhaps  apocryphal,  rumor that does seem plausible: GM had 5,000 Aztecs from the 2006 model year stashed in a couple of warehouses that were overlooked when the company went kaput, er, Chapter 11. They were discovered recently and are selling on the gray market for $7,000. No confirmation or denial  was obtained from GM. But one unimpeachable source who must remain anonymous on the Left Coast told me a few Aztec’s were given as prizes during a ProAm golf tournament at Torrey Pines and that they were quietly offered at the price mentioned to a few individuals.

Does anyone have an answer? 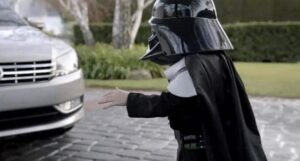 VW's Darth Vader ad was a hit of the 2011 Super Bowl. Who'll be most memorable this year?

It’s all about the money. $3,500,000 worth of money!  That’s correct — $3.5 million for just one 30-second in-game commercial during the NBC broadcast from Indianapolis next month. And that’s a few hundred-thou up from last year’s record setting audience of 111 million viewers. It’s the major live event of the year so big numbers mean a big numbers investment by advertisers in both advertising time and production costs which start at about $1 million and go up and up and up.

People love the Super Bowl and it has become a national commercial obsession with 35-minutes of commercial time in-game. A mental calculus (35 minutes x 2 thirty’s per  = 70 commercials) at $3.5 mill figure produces $245,000,000 in revenue for Comcast, NBC;s new owner in broadcast revenue. But there’s a new offering of live streaming and replays on the new NBC Sports Channel that I’ve been told is an add-on to the in-game ads. .

The usual advertising suspects Budweiser, Coca-Cola, GoDaddy, Best Buy , Mars will again be on the grid. Automobile advertisers who have already signed-on are: Audi, BMW, Chevrolet, Chrysler, Hyundai, Kia, Toyota and Volkswagen. Mercedes-Benz is not running this year saving its dollars for next year (2013) for a big New Orleans push, MBUSA’s new boss, Steve Cannon, told me in December, while he was still vice president of marketing.

VW has the toughest chore to get as much positive buzz from the Darth Vader commercial it used last year and Ad Age is reporting the German maker is considering a 60-second commercial. Chrysler’s broke the thirty and sixty-second barrier with its unprecedented two-minute, done-at-the-last-moment, Detroit-centric spot ‘Imported from Detroit’ featuring rapper Eminem. The spot garnered warm feelings and tons of local Detroit and auto-folks buzz but it did not resonate outside of auto aficionados, according to research I’ve seen from Ace Metrix. Not a word has leaked from Auburn Hills about 2012 plans.

Kia’s commercial was a sixty, but no news yet. Chevy I know was offered 5 XLVI spots, but approved just three. Hyundai too has had its corporate lips sealed. Ditto for all the others.

The dilemma for any Super Bowl advertiser is whether to sell product or produce entertaining commercials. And funny is damn near impossible to do and appeal to most viewers.  Stay tuned.

COTY – Commercials of The Year Awards

The nice people at Ace Metrix who recently provided MMM with the most effective auto ads of the holiday season announced this week the most effective ads overall and across 23 different categories for 2011, a list that represents the top one-half of one percent of all television ads to break in 2011.

The top auto ads? BMW and Nissan. The top ad? KitchenAid’s minute-long ad demonstrating its innovative food processor is the Ace Metrix Ad of the Year, achieving the highest Ace Score (699) of all ads in 2011. The Ace Metrix 2011 Top Ads list is the only list that represents the effectiveness of the top television creative by category as derived from a ranking of every new ad to air nationally in the year.  Since everyone has an opinion about advertising and especially about television commercials (see above Super Bowl comments) all the winners are detailed below with links to view the commercials. So pretend you’re a critic how would you rate the ads?

The focus of the winning ads as detailed by  Peter Daboll, CEO of Ace Metrix, who  noted, “Storytelling was a powerful creative tool for advertisers in 2011, but In addition product innovation was a dominant theme for 10 of the 23 top category ads. To be a top ad, you need to deliver more than just ‘likeability,’ which is just one of the many criteria that go into an Ace Score.  The highly effective ads on this list need to score well with consumers on multiple dimensions, such as relevance and information.”

The Ace Metrix Ads of the Year, by Category (All ads can be viewed here)

Ace Score is the measure of ad creative effectiveness based on viewer reaction to national TV ads. Respondents are randomly selected and representative of the U.S. TV viewing audience.  The results are presented on a scale of 0-950, which represents scoring on creative attributes such as relevance, persuasion, watchability, information, attention, etc.

A highlight of the Ace Score is the ability to measure various attributes of the commercials. “Ads that demonstrated product innovation clearly knocked the socks off of consumers,” Daboll said.  He noted the KitchenAid ad did as well as ads for Apple’s iPhone, Microsoft Kinect, BMW, and Kindle—which replaced Apple’s iPad as the top tablet ad this year.

Many of the top ads of 2011 included messages adding to brand or product interest in non-traditional areas including:

Value for money, like Olive Garden’s top-ranked “Something New for Lunch” ad, which also portrays appealing food imagery and achieved the second highest combination of relevance and desire of all ads in 2011 – a key sweet spot for restaurant advertisers.

Environmental themes, like BMW’s top-ranked “Ch-Ch-Changes” ad that broke during the 2011 Super Bowl and promotes the company’s “advanced diesel” technology.

Patriotism, like Budweiser and State Farm’s September 11th Tribute ads, the top ads of the year in the alcoholic beverage and insurance categories, respectively. These ads’ persuasion, likeability, and attention­ scores were instrumental in distancing them from other ads in their categories.

See ya at the show.