Maker looking at options in U.S. and Mexico. 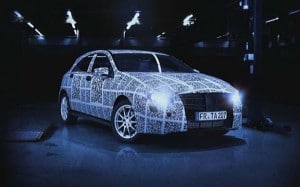 The new Mercedes plant would likely produce a version of the next-gen A-Class - and possibly the Infiniti Etherea, as well.

Hoping to gain a leg up on its luxury market rivals, Daimler AG is looking at adding at least two more plants to its global production network – one in China and the other some place in North America.

The new plants could be a critical step in regaining the global sales lead as Daimler’s Mercedes-Benz brand battles key rivals BMW and Volkswagen’s Audi brand.  Mercedes narrowly lost the U.S. sales crown to the Bavarians in 2011.

Mercedes officials told Germany’s Manager Magazin the plan is to double the brand’s worldwide output to 2.7 million by 2020.  It sold 1.26 million Mercedes-badged vehicles in 2011, about 120,000 less than BMW. Significantly, the publication said Daimler is aiming for a 10% operating margin by the end of this decade.

One of the questions TheDetroitBureau.com is hoping to resolve is what role Nissan will play in the selection and operation of a new Mercedes plant in North America.  Could Daimler be looking at adding production capacity of its own alongside a new Nissan facility newly announced for Mexico?

The decision to expand in China comes as little surprise.  Despite a recent slowdown in that market few expect demand to slip much, long-term, from the double-digit growth that has been seen there since the launch of the new Millennium.

North America is another matter.  Luxury sales fell sharply during the Great Recession and are just bouncing back.  But there are several factors driving Daimler’s decision-making process.  Along with the recovering U.S., it expects to see sharp growth in other regions of the Americas.  The Brazilian market is one of the world’s strongest and expected to continue gaining momentum in the coming years.

There’s also the issue of exchange rates.  With little likelihood the U.S. dollar will regain strength anytime soon it only encourages Europeans to move production out of Euro-denominated markets.  That has already led to a recent decision by Daimler to expand a U.S. heavy track plant.

And rival BMW announced early this year that it will sharply boost production at its own plant in Spartanburg, South Carolina. That plant is now expected to become the second-largest in the BMW network.  About two-thirds of the vehicles produced at Spartanburg are earmarked for export.

Mercedes has steadily expanded its own U.S. plant in Tuscaloosa, Alabama, over the years.  It is planning to add production of the next-generation C-Class in 2014 – with four-cylinder engines coming from a Nissan factory in Decherd, Tennessee.  Those powertrains are being developed as part of a joint venture with the Renault-Nissan Alliance.

With the Tuscaloosa plant apparently running up against a limit to its expansion capabilities, Daimler needs to look at other opportunities.  One of the challenges is ensuring it has the skilled workforce to tap.  It also has to consider logistics, not moving too far away from its supplier base, in particular.

While that could encourage sticking close to the current Alabama plant it might also lead Daimler to consider one of the regions in Mexico where the auto industry is quickly expanding, such as Aguascalientes.

Nissan Wednesday announced plans to set up a second major assembly complex in that city, with production to begin by 2013.  The maker plans to start with annual output of around 175,000 B-segment vehicles but acknowledged the facility could see significantly higher production rates in the “mid-term.”

According to Manager Magazin, the new Mercedes plant would begin production around 2017 or 2018, with it focusing on the next-generation A-Class.  The operation would likely involve some sort of further partnership with Nissan.  That makes sense considering the underlying architecture of the new A-Class, dubbed MFA, will also be shared with the upcoming Infiniti Etherea model.  It remains to be seen if both would roll off the same line, however.