‘Twas the Night Before Xmas, and in My Garage…

A gearhead's visit from Santa. 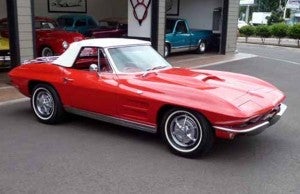 In 1822 Clement Clark Moore, a New Yorker, wrote the now everlasting poem, A Visit from St. Nicholas or, as it has become known, The Night Before Christmas, for his children. Recently I received a version of the famous poem from Don Headrick, aka DucatiDon, of Portland, Oregon, who noted it’s been around for a long time but that he has ‘made few tweaks’ to the rhymes that readers of TheDetroitBureau.com might find particularly appropriate.

‘Twas the night before Christmas, and in my garage…

…there wasn’t a trace of an Audi or Dodge.
The presents were wrapped and the lights were all lit,
So I figured I’d mess with my Corvette for a bit.

I popped the release and lifted the hood,
when a deep voice behind me said “Hey! Looks pretty good.”
Well as you can imagine, I turned mighty quick,
And there by my workbench, stood good Ol’ Saint Nick!

We both just stared at first, not sure what to say,
Santa piped in: “Don’t suppose you’d trade that for my sleigh?’
“Forget it, Ol’ Claus” and I started to grin…
“If you have time, we could go for a spin!”

His round little mouth, all tied up like a bow,
burst into a smile when he said “Well come on, man – Let’s GO!!”
So as not to disturb all the neighbors’ retreat,
we pushed my old Sting Ray quietly onto the street.

Then taking our places to drift down the hill,
I switched on the engine and let the clutch spill.
The sound that erupted caught Santa’s surprise,
but he liked it a LOT, by the look in his eyes.

With cold tires spinning and hot headers aglow,
we drove on and out to roads hot-rodders go.
Santa’s grin widened, approaching his ears,
with every shift up as I went through the gears.

The old man exclaimed “Can’t recall when I’ve felt so alive!”
So I backed off the gas and asked “Do you want to drive?”
I think he was stunned when I gave him the keys…
as he walked past the headlights he shook at the knees!

That small block let out a deep exhaust sound,
When Santa jammed on the power, the tires tore up the ground.
Power shift into second, again into third!
I grabbed for the handle, at loss for a word.

With the tank reaching empty,
Santa returned for his sleigh,
never to forget that ride
in my ’63 Sting Ray

But I heard him exclaim,
as he blasted from sight,
“MERRY CHRISTMAS to ALL, and to all a good night!

I queried DucatiDon about his vehicles. He wrote, “I have owned a ‘03 Milestone Edition Roadster, a ‘04 Commemorative Edition Z06, and now have a 1963 340hp Roadster.

Hope you enjoyed it. And our best wishes for all our readers this holiday season!