The geeks shall inherit the earth? 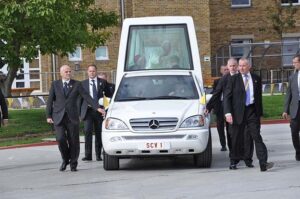 “The geeks shall inherit the earth”?

We’re not wont to quote from scripture very often — and for obvious reasons — but we’ve heard some intriguing interpretations, of late, from those who insist that the Bible would have us all driving electric vehicles.  Among the many citations from the King James edition we’ve heard is that while the supreme being has reserved the heavens for himself, “the earth hath he given to the children of men.”

We’ll leave the rest of the debate to the theologians but it appears that Pope Benedict XVI is taking the concept quite seriously, and wants the next “popemobile” to go green.

The current vehicle, a modified Mercedes-Benz, features a decidedly heavy and aero-inefficient bulletproof cabin in which the pontiff – and up to two guests – can sit and wave at the crowds.

The Vatican has confirmed it is talking to Mercedes about a replacement that would satisfy the concerns of the 84-year-old Benedict, who has placed a strong emphasis on environmental concerns since ascending the Throne of St. Peter.

While security is a critical concern for the Vatican, which wants to prevent the sort of assassination attempt that nearly took the life of the current pope’s predecessor, John Paul.  But a senior official with the Holy See, Cardinal Giovanni Lajolo, last year suggested the possibility of using a hybrid-powered pope-mobile would be studied.

A fully electric vehicle might also be considered though the Catholic News Service, “However (it) still would have to meet the Vatican’s safety and security standards for a popemobile.”

Meanwhile, the Italian auto parts supplier Berman has asked students from around the world for their take on a greener machine for the pontiff to use during his global travels, noted the Vatican paper, L’Osservatore Romano.

Initially, 200 students will take part in the competition and the results from the best 12 entries will appear in a new book by the Vatican publishing house LEV.