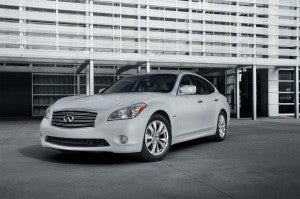 Nissan's latest recall impacts a number of vehicles, including the 2012 Infiniti M.

The defective bolts in the vehicles may break, leading to oil leaks and engine failure. The automaker began the investigation – which covers vehicles manufactured between June and September of this year — after receiving several reports of bolts breaking.

Nissan also recalled 28,294 units of the small Juke crossover due to a problem with a turbocharger boost sensor bracket that can break free from an air inlet tube as a result of defective welding. The problem could cause the vehicle to stall and, in turn, could lead to a crash, Nissan cautioned.

The 2011 model year Jukes were manufactured between April 9, 2010 and May 12, 2011. Nissan has decided to check the brackets and replace them free of charge if necessary. It will start recalling those vehicles from January 9, 2012.