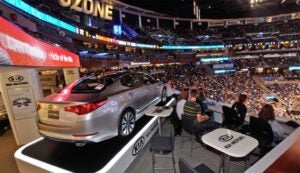 Kia is betting big on the resumption of play at the NBA.

After a three month lockout delay the National Basketball Association finally returned to the boards, tipping off on Christmas day with five season-opening games broadcast on three television cable networks. Millions watched as millionaires played hoops – with major sponsors, like Kia Motors America, betting heavily that the fans would tune back in.

Kia has bet heavily on the hoop hoopla. It may be the fourth ranking NBA advertiser behind T-Mobile, Taco Bell and Warner Bros-Pictures but Kia it is the biggest automobile advertiser in the game. Kantar Media noted that last year the brands expenditures were in the $17 million neighborhood, a number Sprague did not dispute.

The maker’s vice president of marketing and communications Michael Sprague telling me in an interview last week that, “The shortened season (66 games, rather than the usual 82) has not diminished the fans or their interest in the game, its players, the opportunities and sponsorships.”

An impressive television advertising schedule was outlined for the limited pre-season games and those that have been played since the league got back into action. Sprague noted Kia was just about everywhere during the delayed season openers, with a range of spots, and with the Kia NBA Tip-Off running this entire week.  “We’re also the presenting sponsor of the NBA season preview studio shows on ESPN as well as SportsCenter and NBA tipoff reports. That of course does not include our regular sponsorships.”

Kia has a library of  five basketball commercials. Three have been aired this year and two will be shown next year.   Neilson ratings indicate a big jump in viewers for all NBA game broadcasters last year with over $833 million dollars spent in national advertising on the NBA’s networks.

Given the lockout, the buzz, the stars and trades approved and denied by Commissioner Stern, NBA fans, deprived of their daily round-ball fix, will be exposed to and I suggest, enthusiastic about the fast growing Korean brand’s sponsorship.

Kia got lucky when the LA Clippers rookie power forward, Blake Griffin, won the slam dunk event during this year’s All Star Game by leaping over the NBA’s official car – the Kia Optima — as he slammed a dunk through the 18” in diameter hoop that’s 10 feet from the court’s floor. It’s certainly understandable that Kia signed the young-gonna-be-a-super-star to a multi-year agreement for television commercials, personal appearances and activities to be named later. Blake appeared in a quickly produced commercial after the slam dunk that garnered a lot of buzz.

The not so good news? The Clippers have been the ‘who cares’ team of LaLaLand, but with the addition of Chris Paul – who the Lakers desperately wanted – they could become a factor. And in the pre-season, the Clippers beat the golden-boys LA Lakers twice. Paid media advertising is just part of Kia’s aggressive sports marketing program for pro-basketball.

Rather than be just another advertiser, albeit a big one, Kia has mounted a full court press to own the game for 13 of the game’s premiere teams. In the home courts of the Chicago Bulls, Atlanta Hawks, Boston Celtics, Philadelphia 76’ers, New York Knicks, Orlando Magic, Miami Heat, San Antonio Spurs, LA Clippers, Phoenix Suns, Denver Nuggets, Cleveland Cavaliers and the Portland Trailblazers, Kia has major signage and presence.

I attended a game earlier this year in Miami and was really impressed by the brand’s prominent logo placements and ear-numbing audio mentions on the p.a. system. When there’s a break in game action, the on-site entertainment kicks-in big time.

The on-site associations produce more than good will for Kia’s dealers who have unique promotional opportunities, activities and events on and off the court with the individual teams and their loyal fans. Average attendance at home games in the 2010 season set a new record with an average of 17,306 fans a game according to Stats, Inc. As the official car of the NBA, Kia gets on-site credibility and notoriety.

And while a sports blog negatively noted NBA stars don’t drive Kia’s — favoring Bimmers, Benz’s, Rolls and similar deep pocket vehicles — Sprague demurred when he said, “That’s true, but we are appealing to the NBA fans, not the players.”  As the sponsor of the MVP award, rookie of the year, NBA shoot arounds and other events, Kia is establishing benchmarks for automotive sponsorships of sporting events.

Most sports and sporting events have long been sacred ground for car advertisers with their male dominated fans and viewers.  Kia has become an important participant in this fray and has joined the rarified air of those makers landing a premiere sponsorship — with its triple double of advertising, local affiliations and big-name player tie-ins.  Kia is clearly glad to see the NBA back.  Let’s see if it turns into a real slam-dunk.