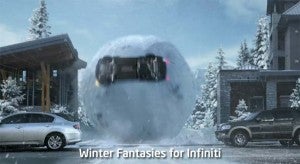 Infiniti scores a rare holiday hit with its snowball ad.

This year’s deluge of Christmas and year-end-sales car commercials began before the Thanksgiving was even on the table and will continue unabated for the next ten days or more.

As the auto industry rebounds from the economic doldrums their advertising agencies have responded with mind numbing versions of the iconic symbols of the season to convince viewers they really need to celebrate the holidays by putting a new car under the tree. It’s the perfect gift, right?

Turn on any cable or broadcast channel and it’s guaranteed you’ll see a tinselized, snowflake-covered, ribbon-clad, buy-that-new-car-now commercial in the first few minutes. But are they really convincing customers?  No, according to a survey just completed and released by Ace Metrix, a respected research company and an authority on television advertising effectiveness. Their study was broken down into two categories, most effective luxury and non-luxury brands, which certainly reflect the buying moods of the season, based on general retail sales data. 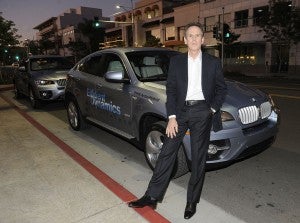 BMW cooks up an ad by enlisting the help of celebrity chef Thomas Keller.

Peter Daboll, CEO of Ace Metrix, noted “Consumers tend to dislike sales event promotional ads, yet this year, many brands opted for this type of messaging instead of better-performing, more creative brand/product messaging.”  The result is the disappointing performance of many of the nearly 35 holiday-themed automotive ads to break so far this season.”

Case in point: it’s astounding that four of the ‘Top 10’ luxury automotive ads were below norm — a clear signal that many automotive brands have stepped away from good creative this season and fallen back on ‘Buy it now, you idiot’ messaging wrapped up in sales events and bows.

As one who has reviewed commercials for over a decade I, too, was appalled by the lack of creative story telling in the commercials I’ve seen so far. Where are the attributes – reputation, quality, reliability and customer service — that define an automotive brand?  Many were missing this important element.  My favorite of the year is the Mercedes-Benz Santa Claus commercial which hit every one of these attributes with an added flavor of whimsy.

The least favorite? Acura’s use of Bette Middler and Gordon Ramsey. I do compliment the usually creative risk-averse brand for attempting something bold and different, however.

Lexus, a brand typically in the Top 10 creative rankings — the brand was allegedly the first to use Christmas themed commercials — was conspicuously absent this quarter in the rankings.  Last year, the brand had more brand/product ads and had an average Ace Score of 584. This year, Lexus geared its creative toward holiday-themed sales event ads (“December to Remember”), resulting in a 14%  drop in their average Ace Score, to 504, well below norm for the luxury automotive category.

One consumer said of the Lexus ads, “People don’t buy other people cars, and even if they did, do you think hearing one annoying jingle would really clue them into the fact they were getting a new car? No!”  Another complained, “It’s the Christmas car bow ad…I think advertisers should know we’re tired of these and they should do something else…” “How many times are car companies going to show a car as a Christmas gift?….It makes me NOT want to buy [from them].”

On a positive note, luxury brands like BMW, Cadillac, Audi and Mercedes-Benz got their holiday messages right with Ace Scores above the norm.  In addition, ads longer than the standard 30-seconds dominated both lists.

According to Jack Mckee, vice president of marketing of Ace Metrix, “The Ace Sore is the measure of ad creative effectiveness based on viewer reaction to national TV ads. Respondents are randomly selected and representative of the U.S. TV viewing audience.  The results are presented on a scale of 0-950, which represents scoring on creative attributes such as relevance, persuasion, watchability, information, attention, etc. “

In a phone conversation McKee said each commercial was viewed by 500 randomly selected individuals with demographics matching the vehicle price range, e.g., luxury and non-luxury. The person watches the commercial then responds to a short questionnaire from which Ace then uses to ‘score’ the commercial.  All commercials in the holiday category were followed by the exact same questions.

The results, McKee said, “Allow us to rank on an equal basis and establish the norm for effectiveness. The time period is 90 days so all commercials are current to the marketplace.”

The charts below detail the scores of the top scoring commercials viewed so far this fall in rank order.  If you haven’t seen all the commercials clicking on the title will take you to a site for easy viewing.  I do, however, urge the consumption of very strong eggnog.

Most Effective TV Ads for Non-Luxury Automotive, Q4 To Date All above norm

Ace was able to share a couple comments from those who liked the luxury commercials.

Infiniti’s Snowball
“I love this commercial! It has a great storyline that’s interesting and gets Infiniti’s point across in a very clever manner. Everybody likes to see the rich bully get what he deserves in the end.”

Mercedes-Benz “Santa’s Choice”
“Oh what fun it is to ride in a 1 horse open sleigh. You know that Mercedes has more horses than that. Otherwise, pretty, pretty commercial, quaint story, and something I’d enjoy watching.”

Have a wonderful Christmas, Chanukah or Kwanza and healthy 2012. And just think, the countdown will soon begin for Super Bowl XLVI which means lots of new commercials — many of which I will preview the week before they air. Stay tuned.