Maker wants to match margins of rivals like Ford, Hyundai. 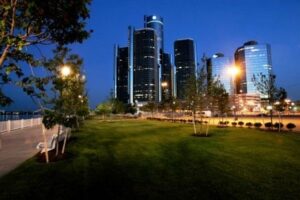 Like a late-to-the-party Grinch, General Motors could sap some of the holiday cheer from its white-collar workforce.  Frustrated that it isn’t generating the sort of profit margins seen at some of its key competitors, GM is looking at ways to boost its efficiency – which could mean more cuts in its salaried staff.

That’s one of the possibilities under study by the Miami-based management consulting firm Hackett Group, which GM has hired to explore its options, reports the Bloomberg News Service.

For the first three quarters of 2011, GM delivered a 5% operating margin, compared with 6.7% at Ford Motor Co., 7.7% at Volkswagen and 10% for Hyundai.  As part of his Power 88 Plan, announced earlier this year, Nissan CEO Carlos Ghosn declared a goal of boosting the Japanese maker’s margins to 8% — along with an 8% global market share target.

A GM official would not provide details of GM’s strategy to boost margins, nor even confirm Hackett’s hiring but did acknowledge to Bloomberg’s Dave Welch that under CEO Dan Akerson, “We are streamlining our business, looking for efficiencies,” adding “there will be some headcount reductions” on a global basis.

That’s in sharp contrast to what’s happening on the blue-collar side of the maker’s employment roll.  It has already added several thousand hourly employees since emerging from bankruptcy in July 2009 – and it has agreed to add thousands more under the contract it signed last autumn with the United Auto Workers Union.

Further cuts would put an emphasis on efficiency, a GM mid-management source – asking not to be identified by name or job title – conceding, “We still have a lot more people than we need.  We could actually cut jobs and do our work faster if things were organized right,” he said, referring to product development.

Some experts question whether GM could generate any real significant increase in its margins simply by slashing its white-collar ranks.  Resolving problems overseas, particularly with the maker’s long-troubled European operations would provide a much-needed boost.

Clearly, GM needs to get the message out that it is bringing its financial house in order, and the potential is there to boost its earnings by billions if it can come close to matching its rivals’ margins.

Questions about GM’s ability to deliver on its promises have stunted the maker’s performance in the market since a November 2010 IPO.  After briefly rising to a peak of $39.48 a share, GM stock has been fluttering in the $20 range in recent weeks.