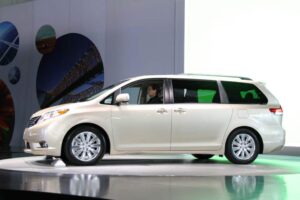 Toyota recalled 200,000 Sienna minivans in 2011, the third year in a row in which it topped the U.S. recall list, with 3.5 million of its vehicles impacted overall.

Editor’s Note: This story has been revised to reflect a last-minute Honda action and final federal recall numbers for 2011.

It isn’t always good to be number one, as Toyota clearly understands.  While it slipped from first to third in the global automotive sales sweepstakes when the books are closed on 2011 the Japanese giant might be more pleased that it narrowly missed having the most recalls of any automaker in the U.S. for the third year in a row.

Despite the maker’s claim that it has put its quality and safety problems behind it, Toyota — and its Scion and Lexus brands — still were forced to recall 3.5 million vehicles this past year, significantly more than the third-highest manufacturer on the government’s list.  And that doesn’t include a sizable number of vehicles for which the maker issued technical service bulletins, which encouraged dealers to fix nagging problems that didn’t wind up getting tallied on the National Highway Traffic Safety Administration’s formal recall chart.

In all, automakers recalled 15.5 million light vehicles in 2011, according to an analysis by WardsAuto, a sharp decline from the 20 million year before when the industry – largely due to Toyota — saw callbacks jump to 17.2 million cars, trucks and crossovers.  Toyota alone had 7 million vehicles involved in its 2010 campaigns. The worst year for the auto industry was 2000 when 24.3 million vehicles were involved in safety-related recalls.

By 2008, however, manufacturers seemed to be getting things under control, the number of vehicles affected by safety-related problems slipping to just 7.7 million.

Long known for what analysts and automotive journalists would frequently describe as “bullet-proof” quality, Toyota ran into quicksand in late 2009 following a highly-publicized crash that took the life of a California Highway Patrol officer and several family members.  The accident was blamed on loose floor mats that jammed the accelerator in the Lexus the trooper was driving.  After initially hesitating, Toyota eventually recalled millions of vehicles to deal with “carpet entrapment.”

The situation grew worse when a second recall related to so-called “unintended acceleration” was announced, this one because of potentially sticky throttles.  Ultimately, the two issues impacted over 10 million vehicles worldwide.  But millions more Toyota, Lexus and Scion products were recalled for a variety of other issues ranging from steering problems to excessive corrosion that could lead to parts falling off an affected vehicle while driving.

With CEO Akio Toyoda proclaiming quality and safety critical issues – and with the company appointing a U.S. quality czar – things began to turnaround but Toyota still faced a variety of nagging issues during the first half of 2011.  Of the 3.5 million vehicles covered by safety actions this year, six in 10 were recalled during the first half.  Only two campaigns were announced since the end of June – and the most recent, involving 200,000 Sienna minivans, centered around improper tire inflation information posted in the door jams of the people movers.

Nonetheless, industry analysts say the recall issue couldn’t have occurred at a worse time for Toyota as the maker was only barely beginning to recover when, last March, Japan was slammed by a record earthquake and tsunami that crippled the island nation’s auto industry.  Toyota production was only beginning to return to normal levels when, in October, record floods struck Thailand setting back Toyota’s recovery efforts once again.

The maker has lost about 2.5 points of market share in the U.S. for 2011, a massive figure in an industry where manufacturers will fight viciously over a tenth of a point of share.  With competitors like Ford and Hyundai stressing their own quality efforts, analysts like Aaron Bragman, of IHS Automotive, warn that it will be difficult for Toyota to regain its once-lustrous image.  In turn, that is forcing the maker to reach record levels of spending on incentives.

Of course, Toyota wasn’t the only automaker facing recall problems this past year.  In terms of individual actions, General Motors led the pack, according to the WardsAuto analysis, with 21 separate recalls – though they impacted only about 456,000 vehicles.

Ford had the third-highest figure in terms of vehicles recalled, at 3.2 million, in 10 separate safety-related actions.

Honda another maker traditionally associated with trouble-free products, has faced its share of problems in recent years, though the vast bulk of those have been related to a narrow set of problems, notably airbag defects and a faulty transmission control module.

Even some of the smallest makers can be found on NHTSA’s recall list, including Maserati, which had to service 760 of its sports cars, and Rolls-Royce, which had to replace a faulty circuit board on 600 of its small Ghost sedans that could overheat and cause a fire.