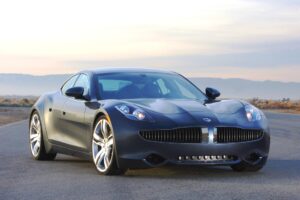 The Fisker Karma is recalled due to a potential battery fire problem.

In a potentially embarrassing turn of events, the California-based battery-car start-up Fisker Automotive will recall all of the cars it has sold so far due to a potential defect that could cause the $102,000 Fisker Karma plug-in hybrids to catch fire.

The problem is only remotely similar to the issue believed to have caused several fires involving Chevrolet Volt plug-ins after they were tested by the National Highway Traffic Safety Administration.  An improperly installed hose clamp, Fisker said, can result in the leak of coolant that could, in turn, short out the Karma’s lithium-ion battery pack.

“If coolant enters the battery compartment, an electric short could occur,” a notice on the NHTSA website says, “possibly resulting in a fire.”

As a result of the defect Fisker will recall 232 of the plug-in hybrid sports cars to repair the clamp.  But less than 50 are actually in the hands of owners following a slower-than-expected launch of the Karma – which is assembled at a plant in Finland then shipped to the United States.  Spokesman Roger Ormischer indicated there have been no reports of any problems with the vehicles that have already been sold.

“There have been no related battery performance or safety incidents with cars in the field,” according to a posting by David Vieau, CEO of Fisker’s battery supplier, A123, on that company’s website, “However, A123 and Fisker are committed to safety and are taking immediate, proactive steps to prevent any issue from occurring.”

(Overall, the number of vehicles recalled in 2011 declined but Toyota led the list for the third year in a row.  Click Here for that story.)

The maker – named after its founder, Danish designer Henrik Fisker – is one of a number of start-ups hoping to gain a foothold due to growing interest in clean, alternative propulsion.  The Karma can be powered by either its lithium-ion batteries or by an onboard internal combustion engine that supplies energy to its electric motors when those batteries run down.

The company claims the Fisker Karma can accelerate from 0 to 60 in about 6.1 seconds and deliver around 50 miles in “stealth,” or battery mode.  But it took a hit from the EPA, earlier this year, which rated the range at only 32 miles and gave the hefty – 5,200-pound – vehicle a meager 32 MPGe fuel economy rating.  That figure is an equivalent balancing battery and gasoline modes.  Operating on gas alone, the EPA said the Karma should get just 20 mpg.

However, the European rating agency, TUV, later countered with a range of more than 51 miles and a 112 MPGe figure.

Fisker is being watched closely, in part, because it is caught up in Washington politics.  The maker received $550 million from a federal loan program designed to encourage the development of clean and efficient automobiles – a fund also tapped for makers like Ford, Nissan and the other California battery-car maker Tesla Automotive.

Critics have pointed to Fisker’s decision to import the Karma from Finland. But the primary purpose of the loan, the company counters, has been to develop and launch production of a lower-cost, more mainstream model currently codenamed Project Nina, which Fisker expects to begin marketing sometime in the 2013 model-year.  That vehicle will be produced at an old GM plant the company has acquired in Delaware.

Fisker claims it has a backlog of 1,500 orders but has so far delivered only a handful of products due to a slow ramp-up at the Finnish plant.  Among the early customers have been actor Leonardo DeCaprio and retired General and former Secretary-of-State Colin Powell.

The problem behind the Fisker Karma recall will undoubtedly lead to comparisons to the issue that is troubling the Chevy Volt.  The first fire occurred three weeks after the hybrid was crash-tested by NHTSA last May and GM has told TheDetroitBureau.com it appears to be the result of coolant eventually shorting out the Volt’s battery.  The incident repeated when another test was conducted in November.

GM has revised its procedures for handling Volt’s liquid-cooled battery pack after an incident where the coolant system might be damaged.  It now recommends the battery be “de-energized,” much as a conventional vehicle’s gas tank is emptied after a serious crash.