Buick Encore Does a Slow Striptease 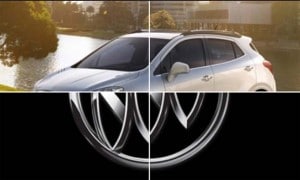 Buick continues to reveal more of the new Encore crossover scheduled for debut next month.

Like the most skilled ecdysiast the Buick Encore is performing a slow and seductive striptease in advance of its January 10 debut at the North American International Auto Show.

The latest pictures – along with a close-up released earlier — confirm what we already know: that the Encore will be the newest and smallest crossover in the Buick line-up, and that it will feature not only the brand’s trademark waterfall grille but the classic Buick portholes, here on the Encore’s hood.

What else?  Here’s what else we can reveal:

The 2013 Encore is believed to be sized to go up against more mainstream models, such as the newly redesigned Honda CR-V, though the Buick Encore will be targeted at a more luxurious segment of the market, just beneath General Motors’ highline Cadillac brand. 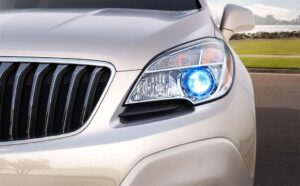 It’s believed Buick will use an all-new platform for Encore, though the maker is holding back on all other details until its news conference at the annual Detroit Auto Show.

The unveiling of the Encore will bring the fifth new model – and second new crossover/SUV – to the Buick line-up in just five years.  That’s a significant turnaround for the long-failing brand, which until the latter part of the last decade had steadily lost most of its products due to lagging sales.

In fact, many observers had expected Buick to be among the four marques – half of its North American brands – that GM agreed to abandon as it emerged from bankruptcy in 2009.  Instead, the century-old division, which was one of the original pieces when GM was founded, has gotten a serious new commitment underscored by the steady roll-out of new product.

Ironically, company officials acknowledge that Buick was saved by China.  Due to a series of historical coincidences, GM introduced Buick as its first brand when it entered the fast-growing Asian market a decade ago.  Buick has now become one of the powerhouses in China and company officials feared that if they abandoned the marque in the U.S. it would have hurt Buick’s image in China, as well.

While Buick officials haven’t confirmed details, it is expected the new Encore will almost certainly be sold in China as well as the United States, Buick’s two key markets.