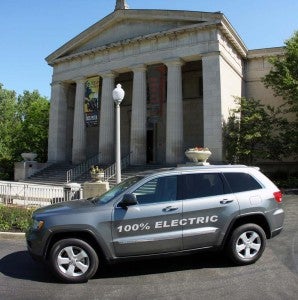 Amp's battery-powered version of the Jeep Grand Cherokee will go on sale in 2012.

Amp Electric Vehicles will be taking its place alongside some of the industry’s biggest players when it rolls out a pair of new battery-electric vehicles at the upcoming North American International Auto Show.

To be more precise they’re not entirely new; Amp is converting both the Jeep Grand Cherokee and the Mercedes-Benz ML-350 to run entirely on battery power.  Nonetheless, the Ohio-based start-up is betting that this approach can position it as one of the major players in the emerging electric vehicle market – and set it up as a key competitor to California’s Tesla Motors, which will launch its own mainstream battery-electric offering, the Model S, later in 2012.

“Given SUVs make up one of the market’s biggest segments it just seemed the right place to focus on,” explained Amp founder and chairman Steve Burns.

It also helps that the underlying platform is shared between the Jeep and Mercedes utes – development having gotten well underway before the former DaimlerChrysler split apart. 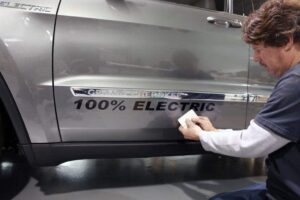 Both SUVs will be converted by Amp to run on electric power and they will be available in both rear-wheel and four-wheel-drive.

Amp has developed a unique electric-drive system it used in earlier prototypes, including a Chevrolet Equinox.  Unlike most other battery-car companies, its rear-drive system mounts two Remy electric motors where the differential would normally seat, one for each wheel.  In the rear-drive versions of the Jeep Grand Cherokee and Mercedes ML they will produce a combined 660 nM of torque.

For the four-wheel-drive models Amp has developed an alternative system with a single, 400 nM electric motor mounted up front, where the conventional gasoline engine would be located.  The motor links with the stock Jeep and Mercedes transmission and all-wheel-drive systems.

The philosophy, said Burns, is that, “The more we can use of the original vehicle the more reliable it will be.”

The two-wheel-drive model will be quicker, with 0 to 60 times roughly equivalent to what a stock V-6 would deliver, the executive added.  But the AWD model will be less expensive.  That might seem counter-intuitive but it reflects the fact that electric motors and the electronics needed to manage them are still quite expensive.

Precise details won’t be released until the Amp news conference but Burns hinted the AWD version of the Jeep Grand Cherokee “will be priced competitively with the Tesla Model S,” which that maker recently revealed will start at $57,000 when equipped with a 40 kilowatt-hour Lithium-Ion battery.  Both the Model S and the two Amp products will then qualify for a federal $7,500 tax credit and other possible state and local incentives.

(For more on Tesla’s pricing plans for the Model S, Click Here.)

Burns was vague about the range offered by the two Amp electric SUVs, suggesting they will get “north of 100 miles” per charge, then adding that the goal is to come closer to the 160-mile range of the base Model S.  That would be a significant engineering feat as Tesla has had the opportunity to develop an optimized electric vehicle by reducing weight and improving aerodynamics.

That is something that Amp couldn’t do to any great degree working with vehicles supplied by other manufacturers.  And, Burns conceded, the Ohio firm doesn’t have the $100s of millions of dollars that Tesla has raised through mega-investors like Toyota and through a low-interest federal loan program that has now effectively been halted.

Still, Amp is hoping that by targeting a green vehicle at a major market segment not normally known for being environmentally friendly it could generate some significant demand.

Among other things, Amp will announce its first dealers at the upcoming Detroit Auto Show, with plans to begin rolling out its new Jeep and Mercedes battery conversions on a regional basis next year.