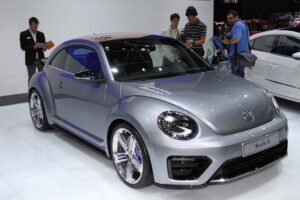 VW is hinting at production plans for the Beetle R concept -- if it gets a good response at the LA show.

You think only the Chinese are good at copying?  Well, take a closer look at what the Germans have in store, notably the folks up at Volkswagen headquarters in Wolfsburg, where they appear to be readying their own version of the vaunted BMW M series, shifting down the alphabet and coming up with the new VW R line.

The new Volkswagen R GmbH subsidiary has already tipped its hands with the Golf R and Scirocco models, the potential next-in-line offering making its debut at the Frankfurt Motor Show this past September.

With the Volkswagen Beetle R Concept now crossing the Atlantic for a North American debut at the L.A. Auto Show it appears the prototype is going to make the jump to production, as well.

The concept offers a glimpse of how the Beetle will look when equipped with different bumpers with three contrasting air intakes and a front spoiler/air splitter, 20-inch wheels with five triple spokes and blue R brake calipers. 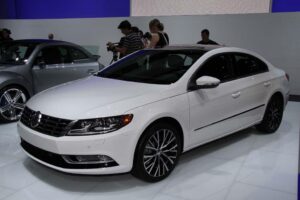 The curvaceous Volkswagen CC undergoes some modest changes for 2012.

The rear bumper also gets air exhaust vents integrated with a diffuser. Furthermore the R has a large rear spoiler and you see two sets of dual chrome tail pipes, which hint at a performance engine.

That could be something on the order of 256 horsepower, the same as in the new Golf R.

VW officials wouldn’t confirm plans for the Beetle R, other than offering a wink and suggesting they will “monitor reaction” among show-goers at the Los Angeles Convention Center over the coming days.

The Beetle R was part of a duo of new products the German maker brought to the 2011 L.A. Auto Show.  Also on stage was the renewed CC. VW’s most curvaceous model has been given a modest makeover for the second half of its lifecycle.

The Volkswagen CC has been on the market for four years and has proven to be quite popular in its niche market with a total sales of 270,000 units worldwide.

Though based on the old Passat platform, the CC will not be built in Chattanooga, Tennessee, where Volkswagen opened its new American plant on May 24th. There, only the current Passat saloon is rolling of the assembly line.

The plant has a capacity of 150,000 cars a year, but is very flexible. According to Frank Fischer, CEO of the Volkswagen Group of America, noting capacity can be raised with minor adjustments to 250,000 units a year or more.

In 2012, he expects to build close to 150,000 Passats that will also be sold in Canada and Mexico. It will also be easy to build other models on VW’s new M2B platform, which has been developed for the new generation Golf and its derivatives.