Musing to amuse on a washboard road. 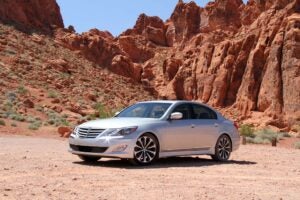 The Hyundai Genesis is a delight, says columnist McCluggage, until it hits a washboard road.

I’m thinking in particular about the ability of a suspension system to benefit a car with a smooth, comfortable ride that Americans consider a birth right and yet be able to follow the surface of the road closely enough to afford reliable grip and secure handling.

I see this as making sure the four contact patches are always as much alike as possible. (A good way to drive, too.) Of course the patches swell and shrink as weight is shifted with steering, braking and accelerating, but any extreme variations means a car is not moving with balance. And dynamic balance, as in any sport, is a good indication of how you’re doing as a driver. Or a car as a driven.

An engineer, which I am not (nor is a jockey a veterinarian), in designing a suspension system has to deal with a spaghetti-plate of contradictions. That good ride for instance means to most Americans something that renders the road surface distant and unobtrusive no matter what its condition. That can be done. But what produces that detachment counters any attributes that make for relatively flat cornering and road-holding.

More briefly, show me a car with long travel in its suspension system and I’ll show you one that in turns leans like a birch in a blizzard. (Just recall the old Land Rovers – ones well before someone let the shed roof fall on it and called it an Evoque – and you’ll remember how it smoothed out baby boulders on the trail and on a highway curve nearly dragged its door handles on the pavement.)

Counter intentions are hard to mediate.

In driving a variety of cars over the years I have watched, or more correctly felt the changes in suspensions as engineers learned how to ease harshness in a ride yet improve compliance and handling characteristics. Seems to me BMW did it best earliest but the Germans all excelled. (Now if BMW would just figure out how to make run-flat tires ride decently – or give up their addiction to them until someone does.)

The suspension fiddling process reminded me of the old days when the efforts to make film both fast and grain-free finally produced one that suited my needs just fine. (If I remember correctly—how digital dims the memory – it was Kodak Tri-X. Or was it Plus-X?)

So reverse here. We are with the Asian cars (generally) being not up to the Germans in suspension sophistication. There’s a dirt road near my house in Santa Fe over which I take my test cars comparing their ability to protect a passenger’s spine yet not to forget the direction they were intended to go. And no bottoming complaints please. My 1993 Suzuki Sidekick is fun to drive over that road; it hops totally sideways they hops the other way, rattles its little windows and shakes like Jerry Lee Louis. I swear at the road’s end it flashes a dusty grin and says: “Let’s do that again!” But not many others enjoy the Kicker’s extremes. Nor are they supposed to.

Recently I’ve introduced some Hyundais and Kias to the washboard adventure. Beginning slowly of course. As creamy as the cars may be on smooth pavement they are disconcerted by my neighborhood road. The Hyundai Genesis, a truly sweet machine in normal circumstances (though a little soft in the turns for my preference) didn’t need the unpaved road. A short stretch of bad pavement – well it was really bad – flustered it noticeably. (I could just hear it say: “Lawzy, Miss Scarlett, I don’t know nothin’ ‘bout rough pavement!”) Smooth again. A slightly embarrassed smile and back to elegance. My good friend Fred calls this a “karaoke suspension.” (Well, I understand.)

The Koreans have come so far so fast I’ve got my stopwatch out to see how soon they’ll catch up to the German systems. Recently I took a new Audi A6 over my test road. I was like a duck in the driver’s seat, serene. Leaving tiny wakes on a glassy surface but below me flashing webbed feet were paddling fiercely. Or shift metaphors to a more appropriate one: the car was a champion mogul skier, upper body still as a whisper while knees pistoned away below to absorb the bumps. Driving can be skiing you know and the German cars are gold medalists in suspensions.

Oh yes. Where do the Asians excel? Generally in reliability and lower cost of maintenance.