We're number on! Says who? 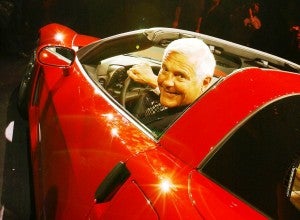 Bob Lutz is back and still shooting from the lip.

Anyone reading or most certainly writing about cars is delighted that Bob Lutz hasn’t gone gently into that good afternoon of retirement after all. Consultant to GM renewed. (Insultant to all deserving of it, if the Lutzian manner hasn’t changed.) Bob was always the go-to guy if a deadline loomed and no lively quotes sprang from a reporter’s notes.

Bob continues to swerve off course when it comes to what is officially OK to talk about. Wow, truly inside info beyond the press release. And he is sure to talk about it in more colorful terms that most. He’s always a car guy; he’s always his own guy. I join the gang that’s glad he’ll be around.

That said I take the opportunity to disagree with what he said in an interview with a German writer.(I read what only was translated into English not being bilingual as Bob is.)

Bob told the German journalist that the top three car companies in the world were now GM, the Volkswagen group, and the Hyundai group.

Starting with his third place I must agree. Personally I prefer the Kia part of that grouping. I like the styling better – smoother, less fussy. I like the general attitude better. More sportive. And I like saying “Kia.”

It was several years ago when the Hyundai Sonata first tapped some journalists on the shoulder and said: “Let me change your mind about Korean cars.” And it did. But that Sonata turned out to be what some of us call “a 20 minutes car”. Great first impression but instead of growing on you over time that early Sonata bared its shortcomings with use. It had learned the words to the song phonetically but didn’t yet know what they meant.

Hyundai kept at it. And the newest Sonata is singing lustily with meaning. (I still like the Kia Optima better.) As I’ve said elsewhere it’s no longer “the Koreans are coming:” they have arrived. And with engines confidently a-burble. Yes, I’ll agree with Bob’s including Hyundai Group in the top three.

Perhaps here is the place to ask: “But what about Toyota and Honda?”

Toyota was on its way to world leadership. First place in sales. Though not in the hearts of car aficionados . Lovability has always been a mystery to Toyota. Designers and engineers would pile on amenities and best-in-class statistics and still gain only wide acceptance, even admiration but, alas, not love. I call these add-on efforts pearls in a box lacking a string.

Car lovers read (and write) car magazines. Most car buyers are – factually – rarely car lovers. Most buy cars because they need what a car does: carry people and things transporting them with relatively little trouble or expense. A car does those tasks better for most than say a Clydesdale, an Irish Mail, a Segway or a restored P-38. These people need a car, but they don’t crave one. The Camry and Honda’s Accord have sold so very well for a long time because they meet the needs of those people.

Honda used to do it with more imagination and style and had in their stores cars that drew car lovers, too. I can remember when we journalists treated a Honda intro as a catalog for our own cravings. Wha’ hoppen? Matters get curiouser and curiouser with Honda, but they still have to know how so one can only hope the jarring occurrences surrounding the earthquake and tsunami have now turned both Honda and Toyota toward recapturing their status of old. I expect a renaissance, already nascent, from both.

Then we have Bob Lutz’s ranking of the Volkswagen Group as second in the world. Credit his marine-bred loyalty at work here that led him to rank General Motors above the VW phenomenon. Now with Porsche under the VW umbrella the company looks like a Yankee batting lineup from my childhood. Audi, Bentley, Bugatti, Lamborghini, Porsche (and Seat and Skoda for the rest of the world.) C’mon Bob. GM needs a nuclear slingshot to be competitive with such a collection.

Bob once berated me for not having one American car in a list of favorites I had compiled for a long ago column. (Really long ago.) Well, that was true then. I found few American cars desirable then. (American pick-ups still rule.) But what could be more American that refusing to settle for second best?

But now I’m really going to get him mad at me. Look here: I don’t think GM is even on top of the heap in Detroit.

I think of GM, Ford and Chrysler as sailboats moored alongside one another near a busy channel. As the harbor traffic comes and goes these boats rise and fall, one’s mast shooting higher than the others, then another and the other. Rise and fall. Not too long ago Chrysler was so low I suspected it had sprung a leak. The Detroit Big Two and a Half. Then the Italians arrived. Tada. Walter P.’s legacy is bobbing away again.

Now I see Chrysler’s mast as reaching farther heavenward than either Ford’s or GM’s. Quickly let me say I have absolutely no behind-the-scenes knowledge, no inner view. No market analysis ability. This is an instant snapshot of bobbing sail boats and a sense I have about the relative energy level of the three Detroit companies. It’s a feeling, a sense. And I’ve felt an enlivening enthusiasm at Chrysler which along with surging improvement in their products makes me excited for them. And I adore the Fiat 500.

Until recently I felt much the same about Ford. I could go very New Age on you and say Ford’s aura is not so ultra violet and chrome yellow as it was. And I will say that just to underline that I am not an industry expert with fact and figures: this is a feeling. (And one that might turn more favorably Ford again if, say, they put a diesel in the Transit Connect. Now that’s positive energy.)

As for GM, Cadillac had a lot of that exciting energy for a while – all that Nurburgring testing. And it showed in the chassis development. That is still the best thing about GM in my experience of it: the chassis. Which is the most basic brick in the structure so that’s a good thing.

I must add that my experience with any GM product has been limited of late. Suddenly I’m off their list to invite to car introductions. And they tell me it’s “hard getting cars to Santa Fe.” (Wonder how others manage it.) But I get in GM vehicles when they are “competitor cars” at other intros or when I’m an awards judge and GM cars are nominated. That’s enough time for me to decide GM still can’t get interiors right – the Volt all hard to the touch and loud to drum your fingers on. (A pleasing visual has to be supported by a pleasant tactile. And audio for that matter. Hail-on-the-roof sounds from hard surfaces do not belong in a $40,000 plus vehicle.)

The Caddy CTS-V Sport Wagon which I expected to love because I prefer wagons to sedans and supercharging to turbo and easy power to not so easy. Papers looked good, pictures looked fine. But in real life the interior was meh and the driving experience a letdown to me. Maybe not enough seat time. Anyway I was under-whelmed. No wonder an Audi beat the Cadillac it in its class at the Active Lifestyle Vehicle awards.

I do commend GM on its small-car program and I love the idea of a diesel in the Cruze. That passes for a gutsy move in Detroit and I hope to actually drive one before they run out of social-media bloggers. I still think GM’s approach in the “extended range electric” Volt makes more sense in a real world than straight plug-ins. Imagine having a plug-in as your only car in an extended power outage like the one in the Northeast following Halloween’s trick of an early winter)

I’m sure Bob Lutz has seen lots behind the curtains as he returns to GM that makes for his enthusiasm in ranking them Number One. But I sense more at Chrysler and I go with my instincts. But really, Bob, how can you put VW anywhere but first? I just got back from driving the new Audi A6 up Santa Fe’s ski mountain. Whoo. Only one thing wrong – it was a sedan and won’t come here as the Avant I prefer.

But Crikey. Such a car….