And the winners are... 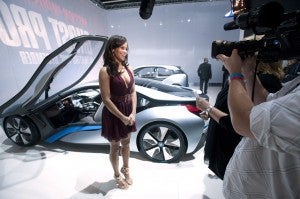 Actress Paula Patton with the BMW i8 she drives in the next Misson Impossible film.

Sorry to disappoint you but this year’s L.A. Auto Show – at least from a staging and presentation standpoint — merits a one word review: lackluster. Naturally, the cars are supposed to be the stars of any show. But the Los Angeles location demands, within proper fiduciary bounds excitement, wow’s, ah-ha grabbers, and OMGs, not somber, sterile, soporific moments.

In giant clusters, hundreds of auto writers, photographers, videographers, analysts, competitive executives and assorted ‘how in the hell did they get credentialed?’ car groupies moved in giant scrums around the Los Angeles Convention Center in 25-minute increments over the last two days.

All this to witness the 19 formal news conference on the official schedule before racing off to file their seemingly endless stream of  articles, blogs, reviews, comments, YouTube postings, FaceBook meanderings, tacky twitters and other news.  There is no way I was able to attend all the shows, nor did anyone I know, but in my unscientific survey of colleagues and in keeping with Tinseltown’s addiction to awards:

And the winners of Best of the Shows of LA Auto Show are: 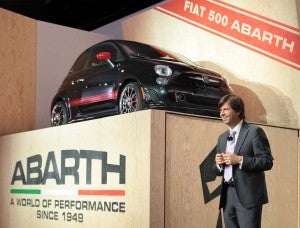 Fiat for the Gucci Fiat 500 and the  Abarth. Olivier Francois, head of Fiat and chief marketing officer — Chrysler Group LLC – was the perfect casting choice. His attire, accent and attitude were spot-on. The fashionista were enthralled, speedsters stung by the scorpion Abarth and those in the middle had pleasure watching the new 500 commercials.  (Click Here for more.)

The packaging presentation was clever, rising out of a simulated wooden box. A matching wooden box contained the Arbarth media kit, only 500 numbered kits were passed out – check eBay now for yours. 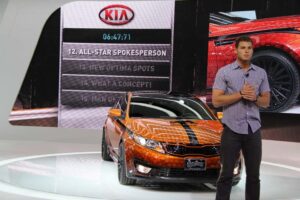 Kia Big Event – The Korean maker added 50% more space to an exhibit that grew to 18,000 square feet and every inch of it crowded. Their presentations had lots of energy, excitement and entertainment value. They creatively set a target for two senior executives to get through a list of 15 separate points of discussion that included several new commercials featuring the surprisingly droll new spokesman NBA star Blake Griffin.

Hyundai Gauntlet  — Korea’s other carmaker offered a good example of how three speakers with high energy quotients can, when staged properly, command attention with sales stats and other numbers. Oozing sincerity and charisma, with exciting lighting and video can work very well.

A few other makers deserve at least some mention, and here are some actual quotes, though I’ll skep the attributions to protect my colleagues:

Chevrolet – too much in too little time.

Cadillac — is this the new luxury?

Audi — it was an appropriate, end of the day.

At least there were no bulls and cows lumbering down Olympic Boulevard. Wait till next year.Marty’s Marketing Minutia – Hollywood Edition