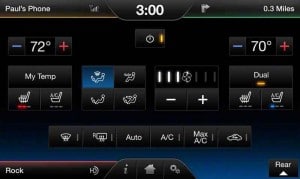 The new fixes should make the MyFordTouch system faster and easier to use.

A quarter-million U.S. motorists will be getting an envelope in the mail from Ford Motor Co. early next year.  Inside they’ll find a small flash drive that the maker says will fix problems owners have been reporting with vehicles equipped with the MrFordTouch and MyLincolnTouch infotainment systems.

Ford has been one of the most aggressive makers in the industry when it comes to rolling out the latest in-car technologies.  It’s helped draw in customers who might have otherwise steered away from the domestic brand – but flaws with the latest MyTouch systems have also resulted in serious customer frustration which, in turn, has hammered Ford’s quality rankings.

Ford plunged from 10th to 20th place in the latest Consumer Reports Reliability Index, while also taking a tumble in the J.D. Power Initial Quality Survey..

The fix?  A free software upgrade.

Repeat, a free software update on a flash drive that simply needs to be plugged into the car’s USB port to install.  If they prefer, owners may also visit their local Ford or Lincoln dealer for the software installation.

The MyFordTouch and MyLincolnTouch systems debuted last autumn on a variety of vehicles, including the Lincoln MKX and Ford Explorer.  The technology replaces conventional knobs and switches with virtual controls on a video screen.  But owners have run into a variety of problems, including a lack of response in cold weather and long delays waiting for a response after pressing one of those virtual buttons.

Since MyFordTouch and MyLincolnTouch launched last fall, Ford has held four customer clinics in which Ford engineers talked directly to hundreds of owners about their experiences with the new technology. Owner feedback revealed the technology was a key factor in the purchase decision  But, while owners reported that they love the system, there were also a number of complaints.

Earlier this year, Ford started delivering on their requests, beginning with how-to videos, and free “personalized SYNC My Ride” training sessions for new owners. (Click Here  to view the videos.)  It also asked dealers to install some modest software updates.

“The keys to continuous improvement are simple: Listen, learn and respond. That’s how we’re going to keep our customers happy,” said Gary Jablonski, manager, SYNC Platform Development. “Evolving the software with meaningful enhanced features was part of our plan from the very beginning. It’s no different than the experience with our smartphones and laptop computers – except now, it’s your car that gets better.”

But Ford recognized it needed a more dramatic fix, and a heavily modified version of the MyTouch software will be installed through the USB drives going out next year.  Here are some of the improvements:

All of the new improvements will be offered to existing owners of MyFord Touch-equipped vehicles, including the 2011 and 2012 models of Ford Explorer and Edge and the 2012 Focus. Owners of 2011 and 2012 Lincoln MKX crossovers will also receive the upgrade for their MyLincoln Touch™ systems.

“We’re seizing the opportunity to continuously improve the Ford ownership experience, and revolutionize what it means to own a car,” said Reitz. “Introducing new technology is only one step in our journey to become known as a technology company. Consistently improving it based on what our customers are telling us marks another milestone in that journey.”

Perhaps the most important change with the software update will be the speed of response when an owner presses a button or uses the voice command system.  Initial testing shows that touch and voice response is at least two times faster than the current system.

Voice commands used in conjunction with navigation will also be simplified.  A motorists will be ablee to say “Main Street” instead of “North Main Street.”  Music requests are simpler, removing the need to include the additional song, album or artist information often found at the end of a name in parenthesis or brackets.  And owners will be able to find their favorite sports team in action via a new Sirius Game Finder function simply by saying a command such as “Tune to Detroit Lions game.”

Ford has repeatedly stressed that with its new technologies it is operating more like a consumer electronics company than a traditional automaker – where changes come at a glacial pace.  With the updates to the MyTouch system it hopes to show it really is functioning like a true technology company that listens and responds.  That could be the start of a new trend in automobile marketing.