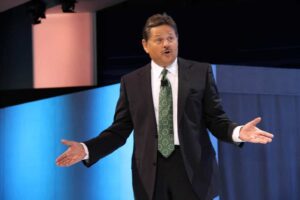 Did a loose attitude about expenses sink CEO Ernst Lieb of Mercedes-Benz USA?

Serious financial irregularities, including the use of a company expense account to cover work at his home appear to have been behind the ouster of Ernst Lieb, the CEO of Mercedes-Benz USA, who was unexpectedly and immediately removed from his post earlier in the week.

While Daimler AG officials continue to maintain silence –publicly – well-placed sources are finally providing what appears to be a better explanation for what was behind the maker’s move, which resulted in the removal of an executive who had generally been credited with leading Mercedes through seriously troubled times and positioning it to regain its position as the best-selling luxury brand in the U.S.

Since the story broke earlier in the week the industry grapevine has been abuzz with rumors about what could have triggered the decision.  A variety of possible transgressions have been proposed, including what one source described as a “dicey” scheme to help boost Mercedes’ U.S. sales by reporting them sold while actually moving them into dealer demonstration fleets.

But, in the end, sources confirm, the real problem was Lieb’s apparent habit of playing loose with his expense account at a time when German businesses are adopting what one described as “a zero-tolerance attitude on abuses.”

That follows a series of scandals, notably one involving illicit payments and gifts involving Volkswagen executives and union leaders involved in the company’s management.  But Daimler was particularly scarred by an international bribery scandal in which it handed out hefty payments to secure contracts around the world.  After a long investigation revealed details of the scheme the maker last year agreed to pay $185 million in fines to the U.S. government.

The settlement also called for the creation of a compliance board that may have snagged Lieb’s billing practices.  In the past, noted a Daimler insider, such matters might have generated a minor reprimand – and indeed, it appears Lieb had played fast and loose with claimed reimbursements before – “but not anymore.”

A variety of actions — including a one-day program apparently designed to make Mercedes’ September sales look good — have been cited as possible reasons for Lieb’s ouster.  (For more, Click Here.)  But the expense account issue is one that was apparently punishable by the equivalent of the corporate death penalty.

There are indications that some expenses attributable to Lieb’s wife were charged off to the company, along with work done at the home that was purchased by him by Mercedes parent Daimler AG when the 56-year-old executive was moved to the U.S. in September 2006.

A flight to Australia, where Lieb was previously stationed, also was put in for reimbursement even though it was taken on personal time.

Some of the expenditures that apparently triggered the corporate crackdown might not have been a problem elsewhere, including golf club fees that often are seen as part of doing business in the auto industry.  Part of Lieb’s duties involve meeting with dealers, many of whom consider the greens an extension of their office.

The problem, apparently, was that Lieb apparently scoffed at the possibility of a crackdown.

“Ernst was repeatedly warned, but he did it again,” a Daimler executive told the German publication Handelsblatt.