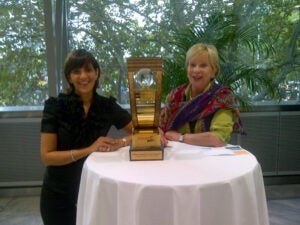 The Jaguar XJ has taken honors as the inaugural winner of the Women’s World Car of the Year.

The news came as a surprise to many – including some of the WWCoTY jurors — who had assumed that the winner would be a much smaller car.

But the first year’s awards were full of surprises, according to organizers, including a tie they hadn’t planned for.

Four years ago, three women motoring journalists were discussing the well-established World Car of the Year program when they realized that of the 54 jury members not one was a woman.  Considering that women now make up a major force — if not the majority — when it comes to buying cars today, there seemed only one logical way to respond.

That led them to come up with a program of their own, the Women’s World Car of the Year. Those three are now a part of the 18 WWCoTY jury members, all well-established motoring writers from around the world who want to give a voice for women motorists and car buyers.

The inaugural awards were presented this week at the IAA Frankfurt Motor Show.

And they underscored the challenges of tallying up the voting from such a disparate group of writers.  Among the surprises was a dead heat for the BMW 5 Series and the Citroën DS3, something the WWCoTY regulations did not take into account.

“This was totally unexpected,” conceded Sandy Myhre, one of the WWCoTY’s founders, “but what it shows is that women have strong opinions on what their ideal car for 2011 would be.”

She promised that the rules will be changed going forward to make it impossible to have a tie, though she concedes it may still be difficult to pull out a clear winner.

Among the other WWCOTY category winners are: