Hatchbacks are Hot at Ford 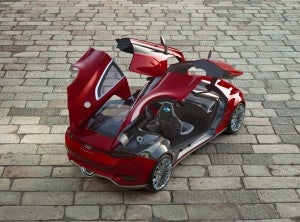 The face -- and backend -- of the future for Ford? The Evos Concept suggests even more hatchbacks are in the pipeline.

Hatchbacks are hot at Ford Motor Co. and the maker’s new Evos Concept – which officially debuts at the Frankfurt Motor Show next week – suggests that even more 3- and 5-door models are in the works, according to the maker’s head of global product planning.

Long considered unacceptable to U.S. motorists, hatchbacks are gaining ground fast with younger buyers and influencing even older motorists to take another look.  That convinced Ford to go with a 5-door design for the Evos Concept which introduces a new look that “will become increasingly familiar” to the company’s customers around the world,” said product czar Derrick Kuzak.

“The (hatchback) body style is becoming increasingly popular worldwide and especially in North America,” Kuzak told TheDetroitBureau.com, in sharp contrast with years past.

Where hatchbacks were offered on past-generation Ford products sold in the U.S., said the product chief, they accounted for perhaps 20% of total sales.  Now, Kuzak noted, “It’s just the opposite,” hatchbacks generating 60 to 70% of demand for models like the 2012 Ford Focus and 2011 Ford Fiesta. 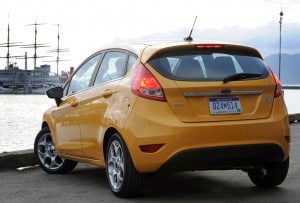 The hatchback version of the Ford Fiesta dominates demand for the subcompact.

That is coming closer to the acceptance rate in Europe, where 3- and 5-door models dominate.

So, said several observers, it’s no surprise that Ford chose to go with the hatchback theme for the new Evos Concept, which is set to debut at the biennial Frankfurt Motor Show.  The challenge is to demonstrate that the coupe-like curves of the show car can still accommodate four passengers in comfort, in particular providing enough headroom for those in the back seat.

Though there are plenty of fantasy-in-chrome elements to the Evos Concept, such as the four gullwing-style doors, it is expected to have a significant impact on Ford products going forward.

One of the questions it may help answer as it shuttles from auto show to auto show in Europe, North American and Asia is whether the hatchback design has the reach to expand out of the small car segment.

“We’re looking to see if it will be accepted in Fusion and larger vehicles,” Kuzak said.

Hatchbacks still account for a relatively small segment of the American market – though demand surged 63% between the 2006 and 2010 model-years, according to WardsAuto.com, sales still only reached 475,048.  But in the subcompact segment, demand grew at an even faster rate, climbing from just 15.5% of total sales in 2003 to 41.8% last year, according to AutoPacific, Inc. data. 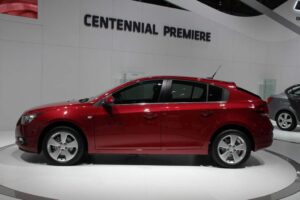 So far, Chevy has said it has no plans to bring the Cruze hatchback to the U.S. - but that could change.

Ford isn’t the only maker that sees significant opportunities for hatchbacks.  While Nissan is updating its Versa sedan for 2011, the maker says it will likely remain an also-ran compared to the Versa hatchback, which has generated about two-thirds of the sales of the maker’s smallest U.S. model.

Ford’s strong showing could influence other makers, analysts say, especially GM.  The U.S. giant is adding several new hatchbacks, including the subcompact Chevrolet Sonic and smaller Spark, but has so far vetoed plans to bring the hatchback version of its compact Cruze – recently launched in Europe – to the States.

Should sales keep growing, GM and other makers are likely to start migrating to 3- and 5-door designs at a much faster pace.