Hail to the victors valiant. 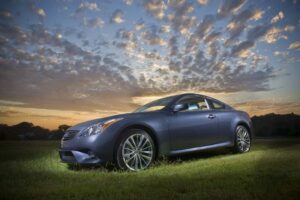 Infiniti's G37Xs is a pony car with luxury retirement.

Road trips are usually undertaken in roomy sedans or crossover SUVs. One would not normally select a sports coupe for a 250-mile slog from Chicago to Ann Arbor, Michigan, but then, one normally doesn’t have tickets to see one of college football’s best rivalries being played under the lights during the first night game at Michigan Stadium.

The G37Xs coupe is an interesting work of two-door art, with fender bulges and sleek, swoopy lines. It’s a pony car in tailored duds—the back seat is useless for adults, the trunk on the smallish side—complete with a snarling V-6. Upscale trim defines the interior, and our car had plenty of bells and whistles on board.

We reviewed the G37Xs sedan earlier this summer, and now it’s the coupe’s turn. We spent plenty of time in the car, both in urban settings and on the highway.

The 330-horsepower 3.7-liter V-6 provides plenty of punch, snapping heads back off the line — this despite the added weight of all-wheel-drive. The 7-speed automatic shifts a bit crisply for our taste, but those who prefer some old-school rough-and-tumble might appreciate it. 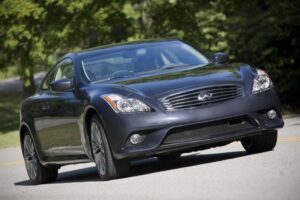 Toss the G into a corner, however, and the tires protest at an earlier limit than one would suspect, despite the fact that the suspension and body are cooperating with the driver’s wishes.

Some body roll persists, but it’s not terribly noticeable. The steering is a bit twitchy initially off-center, and it occasionally needs to be pulled back, but it’s generally quick and cooperative, allowing for accurate tracking through the corner.

On the highway, the G37Xs rides stiffly without punishing, and a fair amount of noise—mostly from the engine—seeps in, although it’s not obnoxiously loud. The seats wear on the back a bit, but generally are comfortable enough. The car tracks straight and true, and eats miles at a rapid pace.

It also drinks fuel at a prodigious rate, but not so fast as to necessitate extra stops between Chicago and Ann Arbor. Rated at 18 mpg city and 25 highway, we saw the G37’s range climb reassuringly higher at highway speeds, and we never flirted with the low-fuel light. We averaged 20.7 miles per gallon over 585 miles of mostly highway driving. 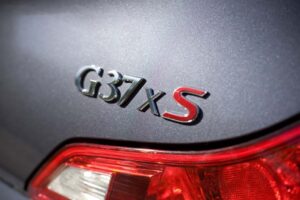 Once almost ignored by luxury buyers, products like the G37 are helping put Infiniti back on the map.

Our tester was loaded with options like a Premium Package (included moonroof, rear sonar, uplevel audio, $2,900), a Sport Package ($1,900, included sport suspension and 19-inch wheels) and a Navigation Package ($1,850, included a navigation system and voice recognition), R-Spec upgraded brake pads ($370) and interior accents ($600). All of these made it a luxurious place to do business, at least in the front seat, and the options brought our as-tester price from $39,300 to $47,795, including the $875 destination fee. And this is a car that had plenty of standard features, including satellite radio, a backup camera, Bluetooth, and keyless entry and starting. 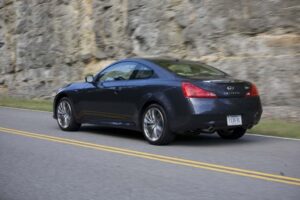 As noted before, the rear seat is pretty much a torture chamber for adult humans, and the trunk has decent enough space but a small opening. Such is the penance for owning a sporty coupe.

The Infiniti G37 coupe makes for a pleasant companion, with eye-candy styling, a neck-snapping V-6, and a comfortable interior. We’d like some more cooperation from the tires and a lower price of entry, and while we like the available all-wheel-drive, we wish a manual transmission was available with it.

The G is no pony-car, it’s a luxury sports coupe. It achieves its mission well—which can’t quite be said of the Notre Dame secondary after that historic battle.

Full Disclosure: Nissan invited us to take a road trip to the game in one of their products, and since this reviewer already had an Infiniti tester scheduled and has an admitted bias towards the Fighting Irish, we accepted.