Making the best even better. 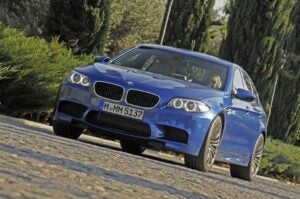 Our European correspondent Henny Hemmes gets behind the wheel of the new BMW M5.

When the first BMW M5 was introduced, back in 1984, it was the fastest production sedan in the world, largely hand-built on the same chassis as the 535 but given the modified M1 engine under the hood.

Time and again, each generation of M5 has gotten a bit more powerful and a bit faster, gen-two featuring a straight six engine and, in 1998, the third generation getting a V-8.  It seemed like BMW would have a hard time topping the 2004 remake, with its superb V-10.  And complicating the challenge: a steady stream of new offerings from Audi and Mercedes-Benz AMG that have stretched the limits of performance beyond what once seemed possible in all but the most exotic supercars.

But BMW has given no signs of retreating.  Barely a month ago, TheDetroitBureau.com got its first look at the fifth-generation BMW M5 out on the Laguna Seca Raceway.  (For that report, Click Here.) Sadly, it was a static display, the Bavarians tantalizing us with some impressive numbers but letting us wait until now to get behind the wheel.

Which is precisely, finally what we had a chance to do this week – though this time at Europe’s Ascari Race Resort, a beautiful and technically challenging race track which features plenty of bends and a long straight that seemed perfectly suited to the latest offering to wear the legendary BMW M badge. 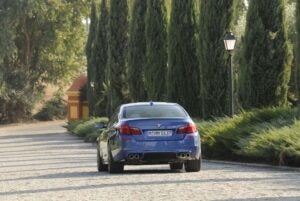 The view of the new M5 most everyone else will get.

Lest you forget – or simply might have missed – the numbers from our previous report, the new BMW M5 puts the old V-10 gen-4 sedan to shame.  Its new 4.4-liter V-8 uses dual twin-scroll turbos to both eliminate initial turbo lag and maximize performance once those boosters “spool up.”

That translates into 560 horsepower and 500 lb-ft of torque, the next-generation BMW M5 expected to launch from 0 to 60 in 4.4 seconds.  Notably, while horsepower will be up 10% and torque increased 20% from the prior-generation BMW M5, the upcoming model is expected to deliver as much as a 30% improvement in fuel economy due to the introduction of a variety of advanced technologies.

The direct-injection V-8 will be the first model sold by the formidable M sub-brand to make use of BMW’s Valvetronic technology.  This electronically optimized system rapidly adjusts both intake and exhaust valves to maximize performance and mileage while also minimizing emissions. 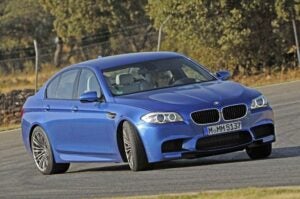 Meanwhile, BMW will introduce a new Active Differential on the new M5 which will be capable of shifting torque, as needed, between left and right rear wheels to ensure maximum traction, both at launch and under aggressive driving maneuvers.

That reflects a significant shift in strategy, suggested Brian Watts, the global marketing manager for the M brand.  “Two years ago, we would’ve focused on straight line acceleration.  Now we no longer limit it to one single factor,” but are aiming to maximize handling, braking and other aspects of performance.

Did we mention the thunderous exhaust note that is almost as rewarding as the neck-snapping acceleration you get when you launch?  It’s just that much better a sound than the off-balanced note of the old V-10.

Whether BMW was right in going into this direction with its ultimate sports saloon can only be proven on the road. And that is exactly where I started. During the drive on the public roads to the Ascari track, the M5 turned out to be excellent company. You could push it to absolutely crazy speeds, and thanks to its impressive torque that peaks between 1,500 to 5,800 rpm passing slower traffic is a matter of mere whim. 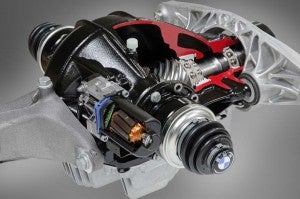 Another major change is the combination of the V-8 with a DCT 7-speed dual-clutch transmission that replaces the old SMG. When in the automatic mode you hardly notice it intuitively choosing the right gears. At the track it feels only natural to use the rubber covered paddles an the steering wheel. The DCT is quick and smooth and excellently matched with the engine.

One downside you discover on the track: the weight of the new M5 causes some noticeable understeer.  It only becomes more obvious, after a few laps, as the tire pressure gets higher and higher.

Of course the Michelin Pilot Super Sport are not designed to go racing. I have no idea of the temperature of the asphalt, that was heated under the blazing sun. But the outside temperature rose from 80 to 90 degrees during the morning. 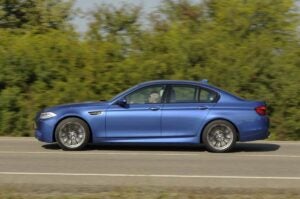 Though not quite the match of the light and nimble-footed M3 on track, the bigger M5 is extraordinarily well-balanced, says reviewer Hemmes.

And despite that modest complaint, the new M5 is an extremely quick and forgiving car.  Yes, it can be daunting, at first, but it becomes increasingly intuitive to push the new sedan to its limits.

One of the joys of the new BMW M5 lies in the possibility to adjust the car to your own liking. It offers a slew of possibilities – which may be confusing at first — but you soon find out the appropriate mode for the moment. The M-button on the steering wheel helps you adjust throttle response, ESP modes, transmission and dampers.

Although it was fun to drive the M5 on the race track, that sort of environment is probably better suited to the nimble and lightfooted M3. But that wasn’t the goal when developing the M5 either. For those owners who do want to take the M5 racing, they can get more appropriate tires as well as, the optional upgraded brakes.  And what they will find is an extraordinarily well-balanced car that seems intent on making you feel that much better a driver. 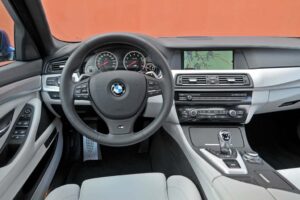 The view from behind the wheel.

Considering the history of the M5 it’s no wonder this super-sedan has always been in such high demand.  To date, some 55,000 have been sold worldwide.  Sales of the various M-models form an important part of M GmbH’s business, and they collectively recorded an increase so far this year of 2.1%, to 10,365 units.

With the addition of the fifth-generation M5 expect to see those numbers keep growing.

The new BMW M5 will reach dealers in Europe by the beginning of December, and will arrive in the U.S. next summer. American prices will be announced in spring.