Citroen Delivers Another Reason to Want Them Back 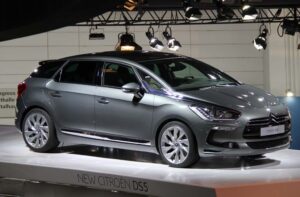 To check out the new offerings from most makers at the 2011 Frankfurt Motor Show, reporters have had to squeeze in and wait for the requisite press briefings.  But with Citroen’s newest model all they had to do was catch the shuttle.

That’s because the French maker’s new DS5 was put into early action on the grounds of the Frankfurt Messe moving the media between the show’s 11 halls.

The new DS5 – which is offered with three different powertrains, including a hybrid – helps complete the new upscale brand-within-a-brand.  And it raises again the question why Citroen has yet to try to stage a return to the U.S. market.

The Citroen DS5 hatchbacks in the shuttle fleet – all painted a distinctive metallic white – feature the new Hybrid4 powertrain which, unlike most other maker’s systems combines a battery drive with diesel power to maximize fuel savings.

That’s a 163 horsepower HDi diesel combined with the hatchback’s 37-horsepower electric motor, both linked through a 6-speed automatic gearbox.  To further enhance fuel economy, the package features Stop/Start capability, automatically shutting off at a light – or when picking up a journalist – for example.

But the package can also deliver some unexpected performance with its Sport Mode, the electric drive adding some torque to the diesel’s output.

Once inside the hall, reporters – and soon, the public – discovered the Citroen DS5 is also available with a mix of conventional gasoline and diesel engines.

With its airplane cockpit-style interior, the DS5 features an array of electronic wizardry – as well as the usual high-line leather.  Base price of around $36,000, sources say – Citroen hasn’t officially confirmed a number — can quickly push into something nearing $60,000 when loaded with options that include the diesel-hybrid drive.