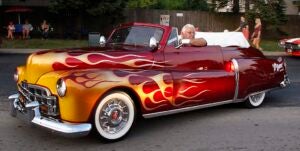 Is this heaven? Flame on at the Woodward Dream Cruise. Photo: Alice Hudder.

There is such a thing as car-geek heaven, and it’s in southeast Michigan.

One can only imagine the conversation between a ghostly hot-rodder and the poor kid working the counter at the Coney dog stand.

Ghost: “Is this heaven?”

OK, OK, Woodward Avenue between Pontiac, Mi. and Ferndale, Mi. isn’t crawling with old muscle cars and hopped-up rat rods year-round. But once a year, the Woodward Dream Cruise brings plenty of classic cars—as well as late-model and new cars that have a performance bent—to the Detroit area, where they cruise Woodward while locals camp out and look on as if they were sitting in the prime seats at the Tigers’ Comerica Park.

They start turning out on the balmy Detroit evenings all week, as if getting into some practice before the official Dream Cruise takes place on a Saturday.  Maybe, some tell, you, it’s better to come out early if you actually want to see those muscle cars move because, by Saturday morning, Woodward is nothing but a slow-moving parking lot/car show.

The Thursday before this year’s Cruise, muscle cars and modded-up late-models descended on Woodward en masse, for a bit of a preview.

On Friday, more classics started showing up both on the avenue and in local parking lots, with local car clubs—along with the Detroit Three automakers—setting up display areas up and down the 8-lane boulevard.

This year, Chevrolet is back in force as the name sponsor of the 2011 Woodward Dream Cruise, and it’s not missing any opportunity to link itself to the event.  It has set up a display to show off its performance products (think modified Camaros and Corvettes, plus stock muscle like the Corvette ZR1 and the upcoming 2012 Chevrolet Camaro ZL1), while Chrysler has an area devoted to SRT and Mopar products, and Ford has a spot focused on Mustangs, especially the 2012 Boss 302, along with a few classic Bosses. 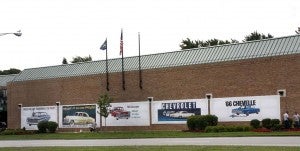 Chevrolet is marking its 100th anniversary this year, and to mark the occasion, the company threw a parade two days before the official Cruise, with the idea of celebrating both the company’s past, present, and future. The past was represented by a slew of classic GM products—split-window Corvettes, a 1969 Camaro Z/28, and a Chevelle SS, for starters—while the present and future were represented by some cars that aren’t so surprising—the 2012 Camaro ZL1, a Corvette ZR1, a 2011 Indy 500 Pace Car Camaro Convertible—and some that are. Forget pushrod small-blocks for a second—Chevy had a contingent of more than 50 Volts on hand, ready to cruise Woodward in relative silence. The new Sonic subcompact was well-represented ahead of its launch, as well. The police escort for the parade made use of the Chevrolet Caprice PPV cop car. 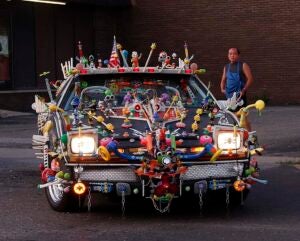 It's a...er...Woodward Nightmare Cruiser? One of many bizarre sights during the Cruise. Photo: Alice Hudder.

Chevy invited several journalists to drive 2011 Camaro convertibles in the parade, thus giving a city-dweller like myself who doesn’t own a classic car (although I suppose if I wait long enough my daily driver will qualify) the chance to participate.

Despite having grown up only four and a half hours from Detroit, and despite living in Michigan briefly about a decade ago, I’ve never had a chance to attend the Dream Cruise, let alone drive in a parade.

Driving in the parade was a bit strange—you become a celebrity by default. People are staring and cheering and waving, and it’s all because you’re behind the wheel of a cool car. During the pre-parade safety brief, we were warned to put our cell phones away and pay attention to the car in front so we didn’t rear-end it, but smartphones became the least of our worries. The crowds, the classic cars, the urge to grab the snapshot camera and fire off a couple quick clicks—all of that made it hard to concentrate. It also means that the parade—which took about an hour—flew by in a blur. 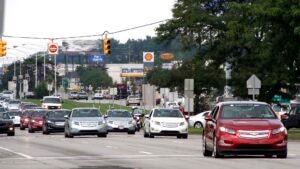 The parade was just a taste of what Woodward will be like on Saturday—cheering crowds, burbling V-8s, hot dogs and apple pie. It also followed a tour of Chevrolet’s Performance Build Center, where the LS7, LS9, and LS3 Corvette engines are hand-built. The plant tour marked not just the occasion of Chevy’s 100th anniversary, but the fact that the 100-millionth Chevrolet small-block will roll off the assembly line sometime this year. Indeed, Chevy’s PR efforts for the 2011 Woodward Dream Cruise focus almost as much on the small-block—which has found its way into countless classic cars—as the company’s birthday. 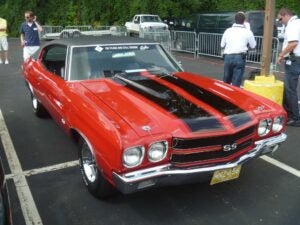 One other note: Chevy is using the event to unveil the E-ROD, which is the first aftermarket crate engine to pass California emissions standards, according to the company.

Emissions seem to be furthest from anyone’s mind at the Dream Cruise. Classic rock and snarling V-8s provide the soundtrack, and it’s hard not to think of “American Graffiti.”

Maybe the Woodward Dream Cruise isn’t car-guy heaven—not every gearhead is into muscle cars. But if it’s not, it’s damn close.