“A vision” of the British brand for the 21st Century. 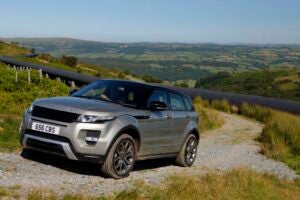 The reveal of the new Land Rover Defender follows the launch of the British maker’s all-new Range Rover Evoque.

Land Rover will pull the wraps off a concept version of its big Defender model at the upcoming Frankfurt Motor Show, with the maker’s top designer telling TheDetroitBureau.com that it will provide not just “a vision” of what the next-generation SUV will look like but where Land Rover itself is going in the years ahead.

Aiming to navigate rapidly shifting global trends – and increasingly stringent mileage, emissions and safety regulations – Land Rover is trying to reinvent itself.  The first sign of where the brand is going came with the launch of the new Range Rover Evoque, the production version of the LRX concept first seen at the Detroit Auto Show in January 2008.

One place the next-generation Defender is set to go is the United States.  The model, which has been unavailable in the States since 1999, should stage a return in the next few years, Land Rover officials promised.  What remains to be seen is whether it will also make its return with the new U.S.-certified diesel the British maker confirms it is developing.

The Evoque, just now rolling off the assembly line, is a downsized, more fuel-efficient version of the classic Ranger Rover, and the first-ever crossover from the brand that, for many, defines SUV.  The Defender concept coming to Frankfurt aims to blend some of the Evoque’s new styling cues while emphasizing that Land Rover isn’t abandoning the classic sport-ute.

It will be “a vision of what the Defender of the 21st Century would be,” said Gerry McGovern, the oft-outspoken former Ford designer who now heads styling operations at Land Rover. 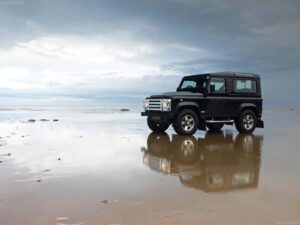 The current Land Rover defines the “lore” of the brand, says a senior official.

But that vision extends beyond just the big ute, McGovern and other LR executives stressed in interviews with TheDetroitBureau.com.  The challenges for the company are many.  Now under the control of India’s Tata Motors, Land Rover intends to grow substantially, though it has no intention of becoming a mainstream luxury brand, insisted Phil Popham, marketing chief for both LR and its British sibling Jaguar.

But to get even the more controlled growth it seeks, Land Rover has to address both consumer desires and increasingly strict government mandates – such as the 54.5 mpg fuel economy standard announced for the U.S. in 2025.

That means lighter vehicles, with Popham suggesting the Land Rover goal is to trim as much as 500 kilograms – or up to 1,100 pounds – from the typical product over the next decade through the use of lightweight materials like aluminum and carbon fiber.

Hybrids are also under development, the executive confirmed, while he also acknowledged “there will be” a diesel for the U.S. market, though Popham would not specify when it will likely appear.  But he emphasized that the technology will not appear in older product lines.  To squeeze in the necessary gear to meet emissions standards will require “all-new products,” stressed Popham, designed around the physical requirements of new powertrains, whether diesel or hybrid.

As the Defender concept will demonstrate, Land Rover wants to significantly improve mileage – and enhance the drivability — of its vehicles without necessarily downsizing.

“We can create a design that isn’t compromised,” explained McGovern.

While the Defender prototype will pick up on some of the cues of the slope-back Evoque, it won’t be just an oversized version of the new crossover.  “You might not see any resemblance,” McGovern added cryptically.

The challenge is to create an over-arching design theme yet also create distinctive visual identities for models badged Land Rover and Range Rover.

Significantly, McGovern noted that there will likely be “more variants” of the latter brand-within-a-brand to follow after the launch of the much heralded Evoque.

The redesigned Defender will help expand the U.S. portfolio of Land Rover products, American marketing chief Kim McCullough confirming the next version of the ute will be able to meet State-side regulations.

That’s significant as the Defender “represents the lore of the brand,” she told TheDetroitBureau.com, despite the fact that it has been gone from American dealer showrooms for a dozen years – and even at its 1997 peak only generated 2,500 sales in the American market.

In all, the new model will be sold in all 174 national markets where Land Rover currently competes, McCullough said.

In the long-run, added Popham, “The Defender replacement has the potential to do even more” for Land Rover than the new Evoque.