Encouraged by strong response to Ciel concept, Caddy will get new premium-luxury sedan, along with several hybrids and other new models. 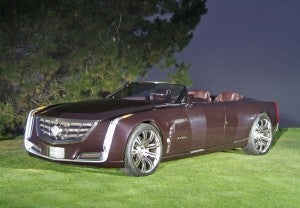 Cadillac is expecting the go-ahead to build a new flagship based on the same platform as the Ciel concept car.

General Motors is expected to give the go-ahead to Cadillac’s flagship Omega project before year-end, according to senior sources, the maker’s top management encouraged by the overwhelmingly positive reaction of the luxury division’s new Ciel concept vehicle.

It’s unclear whether a convertible or sedan version based on the big Omega platform would be first to market, but there is a clear consensus that Caddy needs a super-premium model if it is to have a chance of regaining its position as “standard to the world,” as its long-time ad slogan declared.

Omega would be just one in a wide range of new offerings that would be added to the Cadillac line-up, officials told TheDetroitBureau.com, helping the once-dominant marque fill in the so-called “white space” between its current model mix.  That will include not only a new plug-in hybrid – but very likely some more conventional hybrid-electric models, as well. 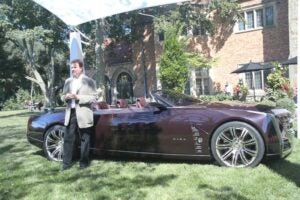 Adding a “flagship” to the line-up is critical, said Cadillac design director Clay Dean during the Ciel’s first public showing in Detroit.  The concept convertible was first revealed, earlier this month, during the run-up to the annual Pebble Beach Concours d’Elegance, where it generated “wows” from both potential customers and the gathered media.

The decision to show the prototype was strongly influenced by the need to make a formal decision on the Omega project, which would target a market segment above the coming Cadillac XTS – itself the replacement for the largely unloved Caddy STS sedan.  While there is strong support for the super-premium project there was concern whether the public would accept the idea of something so bold.

“We do have this residual positive sentiment but the fact is that we’re not relevant for many consumers,” said Don Butler, the division’s marketing chief.

That had worried some top GM managers all the way up to the chairman’s office.  But a car like Ciel, Cadillac is betting, would put the brand back on the radar for even the most affluent buyers, challenging the status quo of luxury brands like Lexus, BMW and Mercedes-Benz.  The convertible, with its dramatic suicide-door design and subtle hint of Caddy’s classic fins, was chosen to represent the brand’s future strategy because ragtops tend to have more emotional power than sedans.

Design chief Dean hinted that a hardtop version is already in hand and could be shown publicly in the months to come.

Precise timing for a production version of the big car is a closely kept secret though sources indicate the maker hopes to have it to market by mid-decade, at the latest.

By then, Cadillac’s line-up will be significantly bigger than it is today.  In the coming months, the marque will launch both the small ATS sedan and the XTS, the latter model aimed at “modernizing and redefining” the brand’s image, suggested Butler.

The ELR is based on the popular Cadillac Converj concept vehicle and when it comes to styling, stressed Leone, “The concept car is the (production) car.”  On the technical side, however, he said “there’s still some optimization going on.”

Most significantly, the ELR will use a newer version of the lithium-ion power pack provided by GM’s battery partner SG Chem.  That means it will hold more power, among other things, for a given mass.  While it would be possible to downsize the pack to get roughly the same electric-only range as Volt, it appears more likely that Cadillac will take advantage of the higher energy density to delivery better range, improved performance – or both – Leone hinted.

GM is making a significant push into battery propulsion, and ELR is not likely to be the last “electrified” vehicle in the line-up, said the engineering chief.  It is “very likely” that not only will there be several more hybrids in the Caddy line-up but that “you will see more than one (hybrid) technology.”  That might mean one model focusing on fuel economy but another taking advantage of the potential performance benefits of electric propulsion.

Might Cadillac also make a push into diesel? For the moment, Leone and other officials downplayed that option.  The high-mileage technology would be more appealing if Caddy were a bigger player in Europe, but diesels are not yet big enough in the U.S. to justify the investment, the maker believes, and there’d be even less traction in China, Cadillac’s second-largest market.

During the Ciel preview in Pebble Beach, GM’s global design chief Ed Welburn suggested the brand is working on more new products than ever before.  That apparently isn’t limited to the models it has already confirmed.  Models like the ATS, XTS and ELR are “just the bow wave,” General  Manager Butler echoed at the Monday Cadillac meeting.

That reflects the broad product proliferation that has swept through the luxury car market, said Aaron Bragman, auto analyst with IHS.  “It’s the reason why BMW and Mercedes-Benz have been able to grow so much.  Now Cadillac has to go after those white spaces.”

As for the Ciel convertible or a hardtop alternative, Bragman said it is an essential addition to the line-up to be considered a truly global luxury player.  “They need a flagship.  And it needs to be a truly striking flagship.”