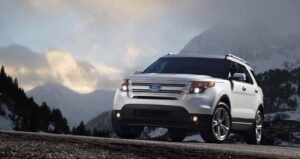 Domestic makers often get slammed for the poor fuel economy of their sport-utility vehicles and crossovers, but Ford hopes to win kudos – and new buyers – as it expands the use of its new EcoBoost powertrains, a new 2.0-liter version of its high-mileage engine going under the hood of its most popular SUV and CUV offerings for 2012.

The promise of Ford’s EcoBoost system is that through the use of turbocharging, direct-injection, and other technologies, smaller-displacement engines with reduced cylinder counts can make as much power as their bigger counterparts while improving fuel-economy. Ford has already applied the EcoBoost concept across much of its lineup, and the latest application is in the 2012 Ford Edge and 2012 Ford Explorer.

Both models are now available with a 2.0-liter EcoBoost turbocharged four-cylinder direct-injection engine that makes 240 horsepower and 270 lb-ft of torque. Available only in front-wheel drive models, the engine promises 28 highway mpg in the seven-seat Explorer and 30 mpg in the Edge – while still delivering 2,000 pounds of towing capability.

Ford says the Edge is 80 pounds lighter and the Explorer 50 pounds lighter with these engines under hood, but neither the Edge nor Explorer is known for being light on its feet. Still, during our brief drive of each vehicle, we could tell the difference from the larger V-6 (V-6s, with the Edge).

First up was the Explorer. While the EcoBoost 2.0-liter provided acceptable acceleration for around-town driving—more than acceptable, actually—it was definitely not quite as peppy as the 292-horsepower, 3.5-liter V-6. Leadfoots, serious towers, and those who need passing power often will be better served with the V-6. Those who never tow, rarely attack an on-ramp, and spend most of their wheel time running errands will do fine with the four-banger, especially if cutting into the household fuel-budget is a concern.

Also, the four-cylinder Explorer feels a bit lighter on its feet, with more nimble steering feel than we remember.

So does the four-cylinder Edge. But the Edge with the four-cylinder is much more fun to drive than the 2.0-liter Explorer. The lighter weight of the smaller crossover makes for peppier acceleration and a pleasantly sporty driving experience. Given the choice, if an EcoBoost were our motivator, we’d choose the Edge. And for many families who only need five seats, the extra mpgs might be worth the $995 premium for the turbocharged four-cylinder.

It’s a strange new world in which four-cylinders cost more than V-6s, and those who live in the snow belt will note that all-wheel drive and the 2.0-liter don’t mix. But for those who don’t want/need the extra AWD hardware, the four-cylinder—especially in the Edge—makes an appealing choice.

The most recent J.D. Power Initial Quality Survey saw Ford take some unexpected hits.  That reflected not just consumer concerns about the complex MyFordTouch system – which has been widely reported – but also complaints that some Ford products deliver notably lower real-world mileage than what the window sticker would suggest.

We’d like a chance to measure real-world fuel-economy, but for now, we’ll have to take Ford’s word for it (as measured by the EPA). Still, with gas prices expected to remain high for the foreseeable future, Ford’s strategy of increasing fuel economy without sacrificing power makes sense, and seems well-executed.

It may go against the American philosophy of “bigger is better,” but sometimes less really is more. In this case, Ford seems to have succeeded in its mission.