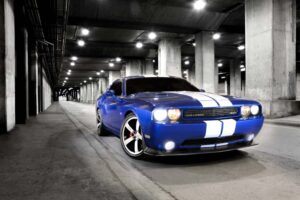 Chrysler has brought performance back in a big way with its SRT brand, launching four new models—the 2012 Dodge Challenger SRT8 392, the 2012 Dodge Charger SRT8, the 2012 Chrysler 300 SRT8, and the 2012 Jeep Grand Cherokee SRT8—but can the company bank on it?

Is SRT awesome or just an anachronism?

As SRT brand CEO told TheDetroitBureau.com last week, the company believes that there’s a business case for large performance cars, and that these vehicles bring buyers into showrooms, and many of those buyers end up buying cars like the Dodge Avenger and Chrysler 200.

In theory, halo cars have always drawn customers into showrooms and auto show displays, and car enthusiasts love them. But in order for halo cars to do more than just attract eyeballs, the rest of the lineup has to be great, as well.

Don’t get us wrong, the new SRT models are fantastic. But they’re also fantastically expensive and not very fuel-efficient. Few will likely be bought as daily drivers—most will be second or third cars for families and individuals that have some extra income.

Which isn’t all that unusual. But what about the buyer who comes into a showroom to check out an SRT8 Charger but only has the budget for a Caliber? Will he or she stick with Dodge? Or shop elsewhere, leaving with a wistful look on his face as he gazes at the Charger?

There’s another question: Will the hoped-for sales success of the current SRT models lead to half-baked SRT Avengers and Calibers that are more show than go? We hope not, since that was a hallmark of the old Chrysler. And with Gilles in charge of SRT, which is now a stand-alone brand, we don’t think it will happen. The man is too much of a car guy to let that fly—and if an SRT Avenger does pop up, it will be a force to be reckoned with, not just an appearance package.

Back to the first point: In order for SRT sales to boost the rest of the brands, the remaining product has to be strong. The good news is that the new Charger and 300 are strong even in lesser trim (and the Charger R/T is no slouch, for those who can’t afford as SRT8), as is the new for 2011 Grand Cherokee. The iconic Wrangler is set to finally get a new V-6 engine for next year, the new Dodge Journey crossover and Dodge Durango are eons better than what they replace, and the updated minivans remain class competitive.

Even the 200 (which is a warmed-over Sebring) and the updated Avenger are improvements over what came before, although both cars still need to undergo a full redesign to really compete at the top of the mid-size class.

And of course, there’s Ram, which is now its own brand. Ram trucks are still popular, despite high gas prices, and truck buyers likely still provide plenty of profit for the automaker.

The challenge then is for Dodge, Chrysler, and Jeep to fix the holes in their respective lineups. The only real subcompact in the Chrysler/Fiat family is the 500, which hurts the company at a time of high fuel prices. The compact Dodge Caliber is unloved and must be redesigned or sent to the garage in sky soon, along with the Dodge Nitro.

Chrysler has no car smaller than the 200, and Jeep has nothing larger than the Grand Cherokee (no seven-seat SUV, at least not yet, although it won’t be surprising to see one in the future). Furthermore, Jeep’s Liberty/Patriot/Compass trio is due for a major overhaul (Compass refresh not withstanding).

This puts Chrysler at a crossroads. The company has emerged from bankruptcy quicker and in better shape than anyone would have guessed, and most of the new and/or redesigned product that has been launched in the past year has won raves from the automotive press. But the products that haven’t changed stand as a reminder of the old Chrysler, and the company still hasn’t adequately covered a couple of key market segments.

The SRT products are awesome. And they will get folks into showrooms. But how many will stay?