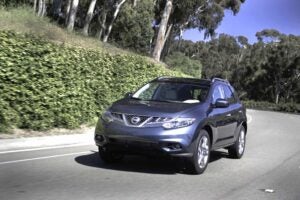 The Nissan Murano is one of the most distinctive offerings in the midsize CUV segment.

Nissan joined the crossover game with the Murano in 2002, and since then, the Murano has spawned smaller clones such as the Rogue and the Juke urban ute in Nissan’s lineup.

The Murano was last redesigned in 2009, and for 2011 the big news is the addition of the CrossCabriolet convertible and the SV trim level.

The SV essentially slots between the base S and the mid-level SL, providing a touch of luxury without increasing the sticker price too much.

Just a touch of luxury, though, since our SV all-wheel-drive tester still had cloth seats and did not offer a navigation system, which is only available on SL and LE models.

What the SV offers over the S is a moonroof, roof rails, fog lights, an 8-way power driver’s seat with power lumbar, a wireless cell phone link, an alarm system, a rearview camera, and satellite radio. 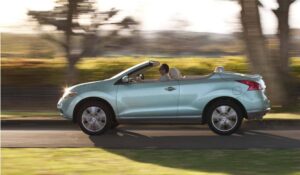 Nissan brings the first crossover convertible to market for 2011 with the Murano-based CrossCabriolet.

Missing amenities aside, what you get is a comfortable highway cruiser with nimble urban moves. This generation feels lighter on its feet than the pre-2009 Murano, and the 3.5-liter 265-horsepower V-6 pulls smartly, if not too swiftly, from a stop.

The steering is sporty and gives the Murano a bit of spice, as does the firm-ish ride. In general, the Murano likes to play, just not too much. The brakes work fine for commuter duty. 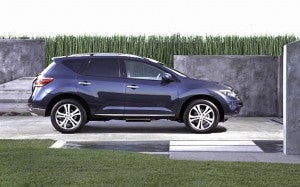 Sporty steering gives a bit of spice to the Murano drive.

Indeed, the Murano comes across as competent yet unmemorable, like a forgotten sitcom that never offended, offered a few laughs, and ultimately found its way to Nick At Nite.

Not that that’s a bad thing. We found ourselves enjoy wheel time in the Murano. It was never tiring on long freeway slogs, it hopped around stalled traffic with ease, it slid into parking spaces without stress, and it hauled small cargo without complaint. And it’s not half bad looking, either.

The continuously variable automatic transmission (CVT) is seen but not heard, and the all-wheel-drive system blends in to the background (granted, our test occurred during a week of pleasant weather.) 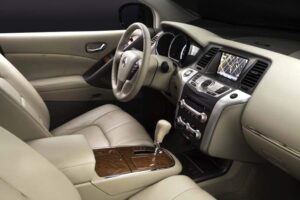 A look at the fully loaded Murano interior.

Interior design is fine, too, although the cloth seats are a let-down, and the center-stack screen is large enough to house a navigation system, even though it’s not even available on the SV, as noted above. Otherwise, surfaces are pleasant to touch and pleasing to the eye.

Fuel economy is listed at 18 mpg city and 23 mpg highway, and we averaged an abysmal 14 mpg in 95 miles of combined city and highway driving. Ouch.

Surely a few heavy-footed launches account for that result, along with the weight of the AWD system. But we expected better. 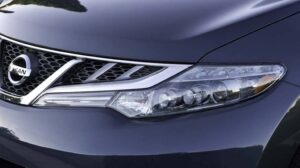 It's all in the details; Murano's low profile headlamps.

Perhaps that’s the penance one must pay for buying otherwise handsome and competent crossover that brings neither smile nor frown to the driver’s face. Nothing in life is free.

That’s the biggest problem with the Murano SV—nearly $35K is a lot to ask for a vehicle that doesn’t offer leather or nav, but does offer satellite radio, Bluetooth, and a rearview camera. Not to mention the poor fuel economy.

On the other hand, the driving experience is better than many of the Murano’s competitors, and there’s something to be said for that.

We had few complaints driving the Murano. It’s a pleasantly surprising crossover that makes for a good cruising companion. But we’re a bit short on compliments, too.

Kinda like that sitcom airing in reruns on Friday night—not many pans, but not many plaudits. Comfort food, via the airwaves.

One could say the same of the Murano — it’s comfort food, in crossover form.