BMW Takes to the Rails

DesignWorksUSA to develop rail “Fleet of the Future.” 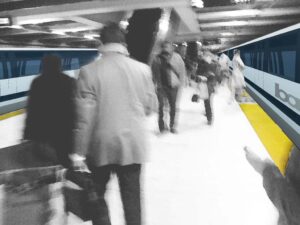 BMW subsidiary DesignWorksUSA will redesign the trains used by San Francisco's BART, the fifth-largest urban rail system in the U.S.

It’s often said that BMW products drive like they’re “on rails.”  The maker is about to give new meaning to that term.

Its California-based design subsidiary, DesignWorksUSA, will collaborate with BART, the Bay Area Rapid Transit System, to develop what’s being dubbed the “Fleet of the Future,” to update the nation’s fifth-largest urban rail system.

While small by the standards of New York City, where millions pass through the turnstiles every day, BART has weekday ridership of 350,000 in four counties surrounding the City by the Bay.  But the system, which began operating in 1973, now has the oldest rail fleet in the country.

DesignWorks will come up with a modern remake of the BART rail cars.  That not only means all-new interior and exterior designs but also an updating of the controls in the train operator’s cab.  The BMW subsidiary will also work with BART to modernize the information system used to communicate with passengers at each of the 44 stations on the various routes.

“We are passionate about creating innovative solutions for mobility in increasingly dense urban centers such as the Bay Area, and we are excited as our collaborative partnership with BART gets underway,” said Laurenz Schaffer, President, BMW Group DesignworksUSA.

Based in suburban Los Angeles, DesignWorksUSA has helped developed everything from sunglasses to laptop computers for a mix of clients ranging from Coca-Cola to Head, as well Microsoft and Dassault Aviation.