The image of aggressiveness.

Call these the image of aggression.  The first official pictures of the new 2012 BMW M5 have landed in our digital hands and we thought readers might want to take a look.

Dubbed by BMW the F10 M5, the new German muscle car can be distinguished by a clearly more aero-focused body, with notable ground effects designed to both improve downforce and reduce wind resistance.

Coming up in your rearview mirror, you’ll likely first notice the larger air intakes.  Blasting by, the 2012 BMW M5 will reveal its quad exhaust pipes.

BMW’s transmission of choice is expected to be a DSG, though AutoBlog reports a 6-speed manual is likely on tap for Americans.

And performance numbers?  We’re waiting for top speed ratings, which should nudge above 180, if BMW provides an unrestricted number.  But on the 0 to 60 front look for something on order of 4.4 seconds or less.

As for pricing, the Euro-spec numbers are being quoted on the order of 100,000 Euros, which would mean a real sticker shock for American buyers once you factor in exchange rates. But the price is likely to dip as the 4-seat rocket crosses the Atlantic. 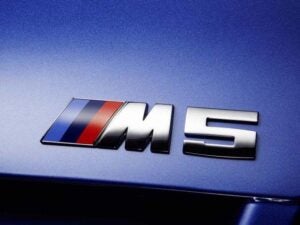