Striking a balance between German engineering and American tastes. 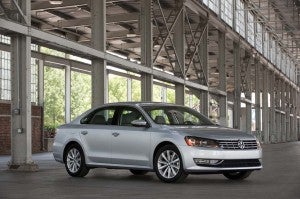 The new, 2012 U.S. version of the Volkswagen Passat shown at the maker's new plant in Chattanooga.

Volkswagen is betting big on the United States, as evidenced by the construction of a brand-new plant just outside of Chattanooga, Tennessee.

That plant, which will build the North American version of the new 2012 Passat (Europeans will get a slightly different version), is set up to produce up to 150,000 units annually on two shifts.

That would mark a significant expansion for the German maker, which has long struggled to regain the foothold it had in the U.S. market in the ‘60s and ‘70s.  It would also help move VW ahead as it takes aim at rivals Toyota and General Motors in a big to become the world’s number one automaker by 2018.

The redesigned Passat, following close upon last year’s updates of the Jetta and Touareg, is the next step in that plan. So is the production shift to the States.

The company is hoping to keep production and distribution costs low, so that the sticker price of the Passat can be brought down to a level that won’t send price-sensitive American motorists screaming in horror and heading to the nearest Hyundai showroom. 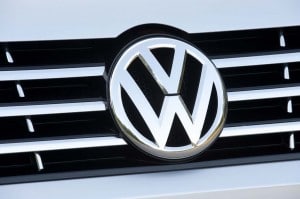 The distinctive new grille on the 2012 Passat frames the familiar VW logo.

Hence the plant being located in Tennessee, a decidedly union-unfriendly state where labor rates are significantly lower than in places like Michigan. VW chose a U.S. site not just to cut down on the costs and logistical challenges of shipping overseas, but also to protect against currency fluctuations.

(For more on VW’s new plant and plans for the future, Click Here.)

Of course, VW’s future success won’t just come down to how clean or efficient the new plant is. Product is what sells in the long run, and VW needs a Passat that compete in the cutthroat mid-size class. The previous generation was often derided as too pricey. What does the next-gen Passat hold in store? 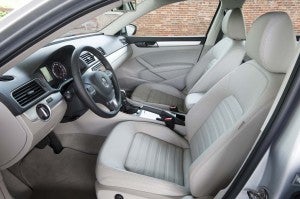 The interior of the new Passat is about as roomy as anything in the midsize segment, a 6'9 journalist finding more than enough legroom even with another 6'2 reporter in the front seat.

After spending a day driving across Tennessee in two Passats (plus spending 20 minutes or so in a third in Nashville rush-hour traffic), our initial verdict is that the car is “pleasantly competent.”

Let’s explore that further. As a general rule, auto journalists are notoriously picky enthusiasts, and the Passat, as capable as it is, is not an enthusiast’s car. Midsize shoppers, on the other hand, are looking for value, size, reliability, and fuel economy (not necessarily in that order), and in those categories, the Passat delivers (to varying degrees, depending on the category).

Volkswagen has had its quality ups-and-downs, over the decades, but has promised to deliver world class reliability on the new Passat.  It will take time to see if the Germans come through, but so far, VW has made several claims about the Passat’s capabilities that, if true, will give the car a good chance against class leaders like the Honda Accord or Toyota Camry. 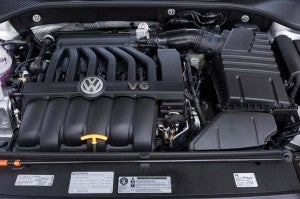 VW will offer three different powertrains for the American version of the 2012 Passat.

For example, the 39.1 inches of rear legroom bests both Accord and Camry, and the 15.9 cu. ft. trunk appears massive to the naked eye. VW is also promising a nearly 800-mile range for its 2.0-liter TDI (turbodiesel) engine (795 to be exact) with a 31 mpg city/43 mpg highway EPA estimate.

So those who value space and fuel economy will take note (the 2.5-liter five-cylinder promises numbers of 21/32 with the five-speed manual transmission and 22/31 with the six-speed automatic, while the automatic-only V-6 VR6 promises 20/28) of the Passat, but what of those who want more driving spice in their life? 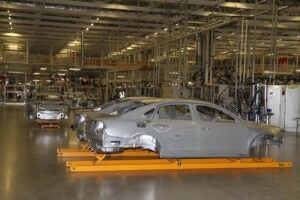 Partially-completed bodies on the assembly line at the VW plant in Chattanooga.

We’ll get to that, but first a breakdown of models. Starting at $19,995 with a five-speed manual transmission, the 2.5-liter five-cylinder marks the entry-level Passat. VW likes to say that the car will start under $20K, but factoring in the $770 destination fee, that’s not true. Either a five-speed manual or six-speed automatic are available with this car. 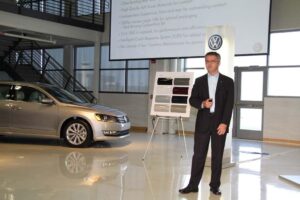 Our first experience behind the wheel of the Passat was in a TDI with the dual-clutch direct-shift automatic (the same automatic available in the VR6), and we were happy with the diesel’s torquey responses (especially in the mid range) and with how well the engine matched to the transmission.

The steering is on the light side, especially at parking-lot speeds, but it firms up a bit in the twisties. The Passat feels stable during aggressive cornering, but understeer makes its presence know, and there’s more body roll than we’d like. 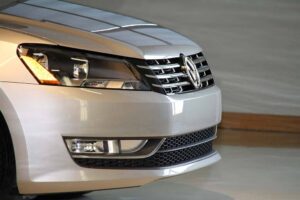 The new Passat gets a distinctly sculpted front end.

The highway ride strikes a nice balance between soft and firm, although too much wind and tire noise filters in to the cabin—tire noise is especially noticeable on coarse surfaces. Diesel clatter from the TDI is noticeable with the windows down, but shut out otherwise.

The VR6 didn’t seem especially peppier than the TDI, despite the extra 140 ponies and 12 lb-ft of torque (258 vs. 236). It doesn’t feel slower, either—the difference here mainly comes down to price, fuel economy/range, and the traditional differences between gas and diesel. Not surprisingly, the 2.5 offers a fair amount less pep. Ride and handling characteristics didn’t vary much from model to model. 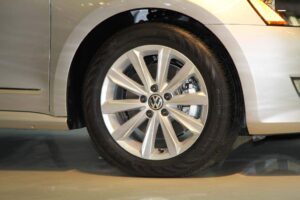 Interior materials are a step up from the Jetta, with a few traits reminiscent of the more-expensive Touareg SUV. Indeed, it’s as if the Jetta and Touareg interiors bred, with the offspring bearing far more resemblance to the Touareg. The soft-touch dashtop is nice, but hard plastic in the lower dash is a let down. The seats are comfortable for long interstate hauls.

Exterior styling follows in the Jetta tradition of being a bit plain, but the overall look is more handsome on Passat—it’s not as snooze-inducing as that of the Jetta. This isn’t a car that will turn heads, but no one will be embarrassed to park it in the driveway.

The mid-size class has become quite competitive of late, and the Passat slots somewhere in the middle. Enthusiasts who place a premium on driving dynamics will want to shop the Ford Fusion, Kia Optima turbo, Hyundai Sonata turbo, and Suzuki Kizashi along with the Nissan Altima/Maxima duo and the Mazda 6. Those who want to turn heads will look at Sonata, Optima, and Kizashi, while those who want an appliance will be best served looking at the much-maligned (by the enthusiast press) yet much-loved (by the buying public) Toyota Camry.

The Passat will appeal on value, space, and fuel economy (especially with the TDI) — which puts it squarely in the lucrative middle of a lucrative segment.