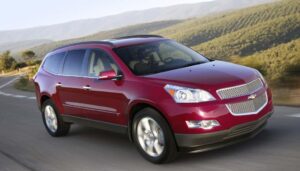 Our reviewer calls the 2011 Chevrolet Traverse competent but uninspiring.

Competence may be a virtue, but not necessarily at the expense of personality.

This is the lesson of the 2011 Chevrolet Traverse, a perfectly capable crossover SUV that inspires nothing of note in those who look at it or drive it.

That’s not necessarily bad, there’s no soccer parent stigma associated with minivans, for example. The Traverse is a fine-looking vehicle, in the way that an Abercrombie & Fitch model looks good and generic.

The only problem with the Traverse’s inoffensive styling is that the two domestic three-row crossovers sold by Chevy’s Detroit rivals—the redesigned Ford Explorer and the also redesigned Dodge Durango—stand out more in a crowd. Even one of the other GM Lambda-based crossovers that share this platform offers more styling verve—the Buick Enclave (while the similar GMC Acadia is also a bit plain-jane).

Of course, sartorial concerns are but one reason to purchase a vehicle in this class, and only the hippest parents on the block are really worried about what the Joneses will think. The rest are looking for utility, practicality, value, and fuel economy. If the driving dynamics happen to offer some personality, well, that’s a bonus. 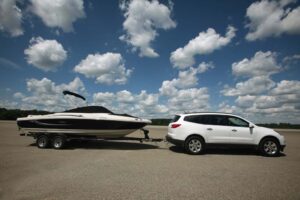 The big crossover has plenty of towing capacity.

For 2011, the Traverse remains mostly unchanged, which means that it comes in one of three flavors (LS, LT, or LTZ) and has a 3.6-liter V-6, a 6-speed automatic transmission, and either front-wheel or all-wheel drive. Our tester was an AWD LTZ. As such, like all LTZs, it put out 288 horsepower, which is seven more than the 281 in the LS and LT models.

So, how well does the Traverse meet its expectations?

Let’s start with the good news. The cabin is handsome and roomy (although there’s too much hard plastic), and the third row is accessible enough for little ones. There’s ample cargo room behind the third row, and plenty of storage, due to a deep but narrow console, a small upper center console, and a large in-dash storage unit.

Around town, the Traverse feels heavy, but the V-6 moves it without much drama. Weight is the enemy of acceleration, and while the Traverse gets out of its own way without much trouble, it does feel every bit of its 4,925 lbs under heavy acceleration. Still, two-lane passing was relatively easy. 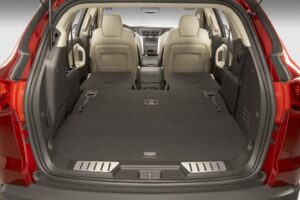 Fold the rear two rows down and the cargo compartment becomes absolutely cavernous.

Weight is also the enemy of fuel economy, and our LTZ tester with AWD checked in at 16 mpg city/23 mpg highway, according to the window sticker. Real world observed fuel economy clocked in at a hair over 14 mpg.

Handling is what one might expect from a crossover—competent if not terribly fun. The steering does lend a bit of sportiness to the proceedings, but that’s about all the driving enthusiast can hang his or her hat on.

The ride is firm but never punishing, with most bumps being absorbed nicely. In highway cruise mode, the Traverse excels. 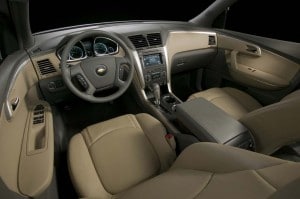 For those shopping mid-size crossovers, the Traverse definitely deserves a place on the list. How high that place is depends on your priorities. Off-roading and towing aren’t the Traverse’s strong suit, although it can tow up to 5,200 pounds. Neither is back-road blasting. But picking up the kids from school? Taking the boss to lunch? Driving to Grandma’s house for holiday? You’d do much worse than to be behind the wheel of the Traverse.

Yeah, fuel economy leaves something to be desired. And there isn’t much inspiration to be found inside or out. But we couldn’t help appreciating the Traverse for doing its job well, without ever complaining.

Football fans love the flashy wide receiver, while music aficionados dig the super-energetic front man. But without the fullback throwing blocks or the bass player setting the beat, those guys don’t get the job done. The Traverse is a little like that: It’s not flashy, but it’s unlikely to let you down.