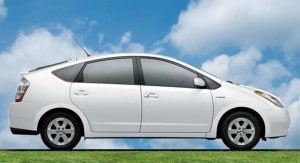 Prices for older hybrids, like this Toyota Prius, are soaring, but used car prices are up overall.

Looking for a used car?  Expect to have to look hard – and pay a lot more than you might have anticipated if you haven’t been in the market for a few years.

While new car sales continue their slow recovery from the Depression-era downturn of 2009, demand for “previously owned” vehicles” has soared to record levels.  But so have prices, with fuel-efficient hybrids and small cars in particularly high demand.  But even high-performance luxury cars are in strong demand, according to industry experts.

“April used vehicle sales were up 12.3% compared to year-ago and 47.6% versus March,” notes Art Spinella, chief analyst with CNW Marketing.

In fact, franchised auto dealers scored big on the used car side last month, selling more than 1.3 million vehicles, a 10.7% increase, and the best month since April 2006, before the economy began to collapse.

But that figure doesn’t really tell the story, as franchised retailers handle only a fraction of used car sales.  Much larger volumes are generated through individual sales, much of it driven by online advertising.

Whatever the source, pricing is on the rise as the market reflects the classic supply-and-demand curve.

The average three-year-old used car now costs about 4.5% more than it did a year ago, according to Edmunds, a data tracking service, but fuel-efficient products are making especially strong gains.  The data show a 20% increase in the price for a premium compact, and 12.5% for a more mainstream small car.

A variety of factors are driving up prices, according to analysts.  There’s the economy, which has tightened household budgets and, for many, made it difficult to qualify for a large new car loan.  Many American motorists are looking to get more for their money, meanwhile, taking advantage of the fact that even though used car prices are up, the biggest hit to a car’s price occurs in the first year or two after it rolls out of the showroom.

Then there’s the fuel price spike, which has many motorists looking to get rid of their old guzzlers and find something more fuel-efficient, which has led to soaring sales in the small car and hybrid segments.

If anything, demand for used cars could get even tighter due to the Japanese disaster of March 2011, which shut down that country’s auto industry for a month and will continue to impact production levels for many more months.

“In May, we’ll see some actual shortages due to inventory which will affect sales in the coming months,” explained analyst Chintan Talati, of TrueCar.com.

While demand for fuel-efficient vehicles is clearly booming, almost all segments of the used car market are benefiting from current, strong sales.

Demand for previously-owned Mercedes-Benz models is “solid,” according to Bart Herring, the new manager of the maker’s certified used car operation.  Most makers offer similar programs, taking the best of their vehicles, as they come off lease, and putting them through a rigorous inspection and repair program.  Typically backed by like-new warranties, such products command a premium over other used cars, noted Herring.

Such programs help hold up residuals, or off-lease trade-in values, which improves profitability for a maker like Mercedes, while also generating improved earnings for dealers.  But Herring acknowledges that some luxury buyers may see the option to trade up compared to what they could afford to buy new.

The big exception in used car sales comes on the truck side, “which slowed dramatically in April,” cautioned Spinella.

“The imbalance is a reflection of a growing number of consumers replacing vehicles with higher fuel mileage cars and crossovers,” he explained.”

Even so, some larger vehicles remain in strong demand, Edmunds reporting that prices of minivans surged 14% in April, while full-size vans jumped 19%.  In fact, the service says the overall price increases it has seen in recent months are the largest it has ever recorded.