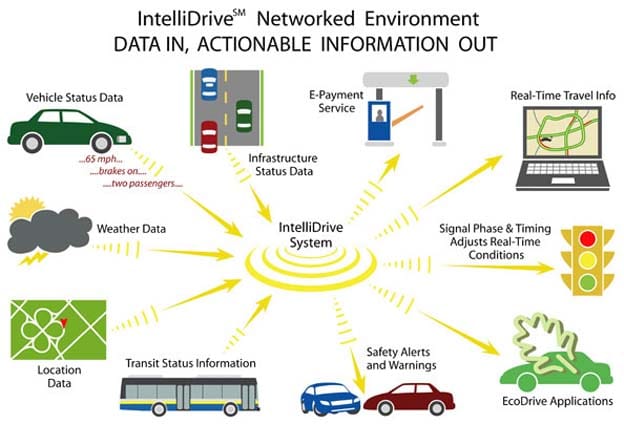 The next big safety breakthrough could come from having vehicles talk to each other - a concept called IntelliDrive.

The U.S. Department of Transportation will host six clinics across the country to introduce drivers to vehicle-to-vehicle communications aimed at reducing traffic accidents and saving lives.

The first clinic will be at Michigan International Speedway in August. MIS has been the site of testing by companies that are developing the technology.

The remaining clinics will be held in Minneapolis, Orlando, FL, Blacksburg, VA, Dallas and San Francisco.

Researchers are developing systems that would allow cars to connect with other vehicles as well as infrastructure to reduce accidents as well as improve efficiency. In fact, some experts say that accident-free roads are possible.

Click here to read a story about the debate over connected vehicles.

The Connected Vehicle Drive Clinics are part of a DOT research program conducted by the Research and Innovative Technology Administration and the National Highway Traffic Safety Administration.

The department is working with the Crash Avoidance Metrics Partnership, a research consortium of eight automobile manufacturers, to develop technology that will help cars, trucks, buses and other vehicles avoid crashes by communicating with nearby vehicles and roadway infrastructure such as traffic signals, dangerous road segments and grade crossings. Drivers will receive safety warnings when there is a risk of a crash or other safety driving hazard.

The driver clinics will measure the acceptance by ordinary drivers of in-car collision warnings, “do not pass” alerts, warnings that a vehicle ahead has stopped suddenly and other similar safety messages. The Department will also use the clinics to test the performance of wireless safety technology, known as Dedicated Short Range Communications (DSRC), in geographically diverse environments.

Approximately 100 local drivers will be recruited for each clinic, which will take place in controlled locations. Each clinic will include about 24 cars equipped with DSRC-based safety applications. Drivers will be evaluated by researchers as they use the vehicles in a controlled environment designed to simulate real roadways and intersections.

After the driver clinics are completed, the U.S. Department of Transportation will deploy thousands of wirelessly-connected vehicles to test how the technology performs in a real world driving environment. The model deployment is scheduled to begin in the Fall of 2012 at a site that will be selected through an open competition.

The Driver Acceptance Clinics and model deployment are part of a major research initiative managed by RITA’s Intelligent Transportation Systems Joint Program Office and NHTSA. Both the driver clinics and the model deployment results will help NHTSA decide, in 2013, if the technology is sufficiently advanced enough for NHTSA to begin a series of rulemakings that could eventually require manufacturers to provide vehicle-to-vehicle communications capabilities in new vehicles.