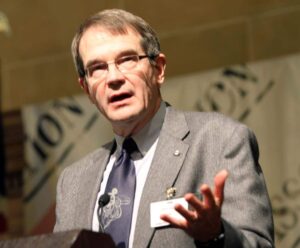 The UAW will seek to get seats on the boards of all three of the Detroit automakers, according to union president Bob King.

The United Auto Workers is preparing to tell General Motors Corp., Ford Motor Co. and Chrysler Group LLC it wants seats on the boards of directors of all three companies during contract negotiations this summer.

UAW president Bob King said he did not want to negotiate through the press, but he said as a “general principle,” union members should have board representation.

“I believe there should be workers’ representation on all boards,” King said, noting workers are routinely given a seat on the boards of German companies by Germany’s codetermination law.

The Voluntary Employees’ Beneficiary Association, responsible to the UAW for retiree health care, already has representatives on boards of both the restructured GM and Chrysler. The directors appointed by the VEBA are independent of the UAW.

King said it is the board of the VEBA, which is independent of the UAW, that will decide whether Chrysler can move ahead with an initial public offering of stock.

The 64-year-old UAW chief said he was also interest in a more direct kind of worker representation on the boards of all three automakers.

The UAW had a seat on Chrysler’s board for a time during the 1980s, but then UAW President Owen Bieber was voted off the board after objecting to executive pay increases.

The UAW also had spots on the German Board of Supervisors of Daimler AG during the eight years it owned Chrysler, from 1999 to 2007.

“We talk all the time,” he said. “I’m very confident of the strength and maturity of relationships,” said King, who described the negotiations as an exercise in advanced problem solving. “It’s not about an adversarial relationship. We believe in a global economy, you have to work together,” King said.

While he declined to talk about specific projects, King said another union objective will be to secure more investment and jobs “for our communities.”

That subject came up again during an announcement that General Motors will add a second and third shift at its Detroit-Hamtramck Assembly Plant.  The facility currently produces the Chevrolet Volt plug-in hybrid, among several models, and will soon add the Chevy Malibu and next-generation Impala. Production of the Volt, in particular, will increase nearly four-fold next year, to 60,000.  A total of 2,500 jobs will be added at the factory.

GM has announced billions in new investments since emerging from bankruptcy protection, as have its cross-town rivals, but the makers also are asking for help remaining competitive.  Ford, for example, has noted it is paying several dollars an hour more than Japanese “transplant” assembly lines.  And the gap is even larger in comparison to the new Volkswagen plant, in Chattanooga.

That facility, which formally launched production this week, is initially paying wages and benefits of just $25 an hour, less than half what 97% of UAW members working for the Detroit Big Three make.

Joe Ashton, the UAW Vice President overseeing GM operations, dismissed any idea that Detroit workers need to match the VW labor costs.  “It’s a new plant,” he said during a conversation at the Detroit-Hamtramck Assembly Plant, and one that expects to increase its own labor costs by more than 50% over the next three years.

Considering the multi-billion-dollar profits the domestic automakers have reported during just the first quarter of 2011, said Ashton, there is no need to be cutting wages and benefits even more.  But, like King, Ashton acknowledged that the primary goal of the UAW during upcoming contract talks is to preserve and even add new jobs.

One possible approach that could satisfy both sides, insiders say, is to use enhanced profit sharing programs that would potentially share the wealth while also putting worker wages more at risk when times are tough.