Nesbitt off to China, Parkinson back to the U.S. 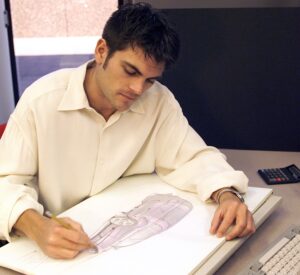 Designer on the move: Bryan Nesbitt during an earlier assignment working on a sketch.

Bryan Nesbitt is a man on the move.  The well-reviewed designer made an early jump from the Chrysler design studios to the General Motors Technical Center.  He then wound up in Europe as GM’s styling boss, before returning to the Tech Center.  Now, Nesbitt is getting ready to pack his bags once again.

The 42-year-old Phoenix native will this time be heading off to Shanghai, where he’ll take charge of GMIO, the maker’s fast-growing international design operations.

While that might have been seen as a demotion or lateral move in decades past, no one is wondering what this means anymore.  General Motors now sells about two-thirds of its volume outside North America, and China is now a larger market for its products than the United States.

Meanwhile, it is in the midst of ramping up the new Baojun brand, which targets first-time buyers in second and third-tier Chinese cities that are just beginning to see the automotive boom that has already taken hold in major urban areas like Shanghai and Beijing.  With competition in China continuing to grow more fierce, design is becoming as important as cost in winning over motorists, according to Sino specialists.

Nesbitt will serve a dual role as the chief of GMIO design and as the “brand champion” for both the Baojun and better-established Wuling brands.  Wuling sales now far exceed those of the better-known – at least in the West – Buick and Chevrolet.

But it is likely that Nesbitt’s stamp will still be visible here in the U.S.   With Buick selling significantly more vehicles in the booming Asian nation than back home, its new products are being heavily influenced by the needs and desires of Chinese consumers.

While Nesbitt will be honing up on his skills with chopsticks, his old role, as executive director – North American Exterior Design and Global Architecture Strategy, will be taken over by Ken Parkinson, who had been running GMIO Design for the last several years.

Parkinson will also take on duties as Chevrolet’s brand champion.