Maker turns to landfill gas to bring down costs at minicar plant. 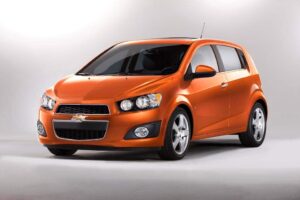 GM is counting on reducing factory energy costs - as well as a new 2-tier wage structure - to justify producing the new Chevy Sonic in suburban Detroit, rather than Korea.

Turning to an alternate source for power has helped General Motors reduce production costs enough at a plant in the Detroit suburbs enough to help GM justify bringing small car production back from South Korea.

The newly retooled plant in Orion, Township, Michigan, will begin producing the pint-sized 2012 Chevrolet Sonic this coming autumn, as well as the Buick Verano subcompact.  About 40% of the energy the factory will use will come from burning natural gas piped over from a nearby landfill.

“Orion is a great example of the latest technologies employed by GM manufacturing around the globe,” said Eric Stevens, GM vice president of Global Manufacturing Engineering.  “As we converted the facility to support the small car program, we took every opportunity to engineer in flexibility and lean manufacturing concepts,” he said.

During most of the year, the system runs exclusively on landfill gas primarily to generate steam for heating and compressed air. The use of the gas is expected to save GM $1.1 million a year in energy costs, while also cutting the amount of greenhouse gases, sulfur dioxide and oxides of nitrogen released into the air, Stevens said.

In addition, GM also upgraded the plant’s lighting system, saving more than 5,944 megawatts of electricity per year – saving $430,000 in the process. Workers also can track energy use on an hourly basis with sophisticated software, enabling them to see real-time usage by department to improve their equipment shut-down activities.

As part of the $600 million overhaul of the plant, GM also upgraded the paint shop, which is heated by natural and landfill gas.  The revamped paint shop uses only half of the energy per vehicle of the one it replaced.

Both the Chevrolet Sonic and Buick Verano built at the Orion plant use a new “eco” paint that eliminates the need for a primer oven and increases quality and appearance by switching to waterborne base coats.

With the various improvements designed into the Orion plant, GM expects to reduce greenhouse gas production by about 80,000 metric tons once the factory is up to running at its full, three-shift capacity,” Midgley said.

“This is equivalent to the emissions from 14,000 vehicles per year, and the electricity reduction equals at the output from 3,500 homes,” she said.

Meanwhile, recycled cardboard packaging from Orion and other GM plants and used denim are part of the Verano’s sound insulation,

Bringing down production costs at Orion was critical, GM officials have said, because there is relatively little margin in producing small cars.  Until now, the Chevy Aveo – the predecessor of the new Sonic – was built in Korean to hold costs down.

Other factors have helped making a business case for moving production to the State, including the decision by the United Auto Workers Union to accept a lower, two-tier wage structure that is expected to shave hundreds of dollars off the cost of building the new Chevrolet small car.