Could debut with all new version of Japanese truck. 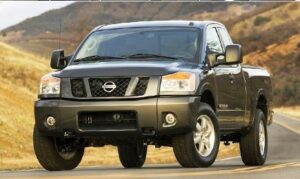 The next-generation Nissan Titan may be getting a much-needed diesel option.

Cummins is developing a high-efficiency inline-four-cylinder diesel engine with money from the U.S. Department of Energy and in partnership with Nissan for demonstration in the Titan light-duty pickup truck.

The project, announced at the DOE’s 2011 Merit Review in Washington, D.C., could mean the next-generation of the Nissan Titan will come to market with a decidedly higher-mileage oil-burner.  That, in turn, might finally help get the truck out of the full-size sales cellar. 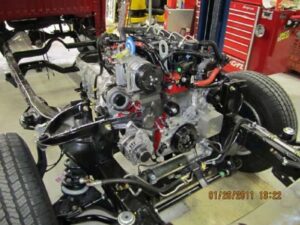 A look at the diesel prototype provided by Cummins and the DoE.

Getting 28 mpg combined mileage could mean more than 30 mpg highway, by our estimate, which could help Nissan meet strong new EPA regulations that will raise fleet fuel efficiency standards for light trucks and SUVs to 30 mpg by 2016. The standard for passenger cars is set at 39 mpg by 2016.

Though the project started in September, Nissan and Cummins have already built a prototype version of the four-cylinder diesel and installed it in a current-generation Titan mule for drive testing. Pictures of the engine show four high-pressure fuel rails feeding the engine’s cylinders.

Four cylinders might not seem like enough to power a full-size pickup but that architecture would be ideal to meet fuel economy goals while delivering almost as much torque as some small displacement gasoline V-8s.

The engine has a 2.8-liter displacement (170 cubic inches). Initial power figures on the engine dyno have the mule test engine producing 350 pounds-feet of torque at around 1,800 rpm. A chart in the presentation shows targeted power levels to be approximately 220 horsepower and 380 pounds-feet.

The engine is a derivative of the four-cylinder ISF architecture that Cummins builds overseas, with 2.8-liter and 3.8-liter displacements, according to a Cummins spokesman. The overseas 3.8-liter is rated at 168 horsepower and 443 pounds-feet of torque.

Innovations highlighted by Cummins in their presentation include the use of high-strength steel pistons instead of conventional aluminum pistons. Steel pistons can handle high power loads with a shorter stroke, which also helps reduce the overall height of the engine for improved underhood packaging. Cummins is also studying the use of variable valve technology, according to the presentation.

To meet U.S. clean-diesel standards, the 2.8 would use diesel exhaust fluid to scrub nitrogen oxide emissions, like Ford and GM use today in their heavy-duty diesel pickups. It would also feature a so-called passive NOx storage system that would capture and hold NOx during cold starts, releasing the gas when temperatures rise to levels of max efficiency for DEF. The passive system would save fuel used today to jumpstart NOx scrubbing when the system is cold.

The total size of the Cummins light-duty clean diesel project is a $30 million effort, with the DOE contributing $15 million. The program is scheduled to run through September 2014, the year in which we expect the next-generation Titan to debut.

Nissan has been working with Cummins for several years studying the potential for a light-duty diesel in the Titan.

The current Nissan Titan is only available with a 5.6-liter V-8 gas engine that’s rated at 13/18 mpg city/highway and 15 mpg combined fuel economy.

Stay tuned for more information as it develops.

We originally reported that “LA-4” was the codename for the engine. That’s incorrect. LA-4 refers to the EPA’s Urban Dynamometer Driving Schedule, also known as “the city test.” It represents city driving conditions and is used for light-duty vehicle testing.

Cummins says it plans to demonstrate the diesel in a truck chassis using the EPA’s Federal Test Procedures (FTP) for emissions certification at Tier 2 Bin 5 levels – used by today’s clean diesels – by December 2013 and at Tier 2 Bin 2 levels by September 2014.

Mike Levine is Editor-in-Chief of PickupTrucks.com, and a regular contributor to TheDetroitBureau.com.