Maker gets a much-needed boost after recent safety problems. 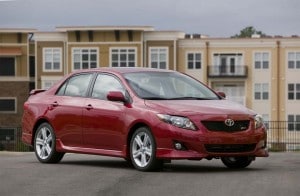 NHTSA has cleared the Toyota Corolla in an investigation into possible steering defects.

Toyota has gotten a clean bill of health from the National Highway Traffic Safety Administration which has found no electronics-related steering problems with the 2009 and 2010 Corolla model.

The second most popular model in the maker’s U.S. line-up had come under review because of claims by some owners that the vehicles appeared to start drifting off course.  A total of 900 complaints had been filed regarding the alleged problem.  A total of 4,100 warranty claims were recorded by Toyota dealers in connection with the issue.

The government safety agency has determined that the problem is related to driver feel, rather than a defect.  Toyota has come up with a repair to change the feel for drivers who aren’t satisfied with the Corolla’s steering.

A recall of the compact model – and the Matrix model, which was also under review – could have been a serious setback for Toyota, which recalled more than 10 million vehicles last year due to a variety of safety-related issues.  More than half of those were cars, trucks and crossovers linked to potential problems with unintended acceleration, including sticky accelerator pedals, but Toyota also suffered a variety of other issues, including heavily corroded minivans and brake problems with the Prius hybrid.

Toyota did receive a boost, earlier this year, when a high-profile review of Toyota products was completed by NASA.  The space agency, on the request of NHTSA, had investigated claims that Toyota’s electronic engine controllers might experience occasional glitches leading to runaway problems.  The study found no instances of the issue and largely pointed to driver error, such as motorists hitting the throttle rather than the brake pedal.

Nonetheless, the issue of unintended acceleration hasn’t vanished.  A major class action is wending its way through federal court in Southern California – where a judge recently ruled that motorists could sue for personal time lost as a result of the alleged safety defect.

Though Toyota no longer faces the threat of a recall that could have involved close to 1 million Corollas and Matrix crossovers, the maker says it has instructed dealers to check for several potential problems that could cause steering problems, including problems with tire pressure and wear, alignment and suspension issues.

Alternatively, it has developed a retuned electronic steering control unit that can replace the original system and which will make the steering feel more precise.