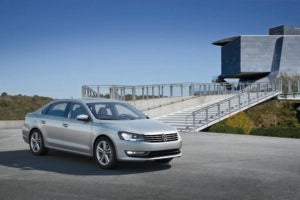 The first 2012 VW Passat will officially role off the maker's new assembly line in Chattanooga on Tuesday.

When Volkswagen opens its new U.S. assembly plant tomorrow, it will be a critical step in the maker’s plan to double sales by 2018 – in part by relying on low wages to help make models like the all-new 2012 Passat more competitive.

The average blue-collar worker at the new factory, Chattanooga, Tennessee, will earn just $27 an hour – including wages and benefits – or barely half the average $52 an hour for workers at Detroit’s union-organized plants.  VW will also have a significant cost advantage over other so-called transplant assembly lines operated by Japanese and other European makers.

That could provide a significant boost for a company that has been saddled with a heavy premium on products imported from Germany, where high labor costs have been compounded by the weak U.S. dollar.

VW has been pressing hard to emphasize value – something that worked for the legendary Beetle nearly half a century ago – rather than focusing on German engineering as an excuse for higher prices.  When it launched an all-new Jetta, last year, it introduced a stripped-down model, the Jetta S, at just $15,995 — $2,000 lower than the starting price for the 2010 model.

Despite critics who have contended that Volkswagen has cut too much content out of the new Jetta, that has helped attract new buyers who have traditional steered clear of the brand because of its perceived price disadvantage.

VW is hoping to take that strategy even further with the new Passat, its midsize model, a version of which was developed specifically for the U.S. market.  It is expected to carry a base price of around $20,000, or roughly $8,000 less than the current version – which should make it more competitive with Asian and Detroit models such as the Toyota Camry and Ford Fusion.

Though Volkswagen has yet to release specific details, the typical midsize sedan produced in a modern assembly plant operating near capacity requires between 15 to 20 hours of labor.  That means VW could save as much as $500 just through labor costs alongside the assembly line when compared to a vehicle like Fusion – assuming, of course, all else is equal.

Industry wage rates are in flux.  Detroit makers actually have seen their costs drop sharply since they negotiated significant concessions with the United Auto Workers Union in 2007 – with additional givebacks coming two years later, as General Motors and Chrysler plunged into bankruptcy.   All told, those helped drop costs from $70 to around $52 an hour.  (Ford wants further labor savings. Click Here for more.)

Among other things, the UAW agreed to a two-tier structure that starts some new employees at half the wages of current domestic employees.  That’s one key reason GM was able to move production of its new Chevrolet Sonic out of South Korea and into a suburban Detroit plant, TheDetroitBureau.com reported last week.  (Click Here for the story on how low wages and energy savings have made a business case for the Sonic.)

The Detroit Big Three are hoping to get additional savings when they return to the bargaining table this summer.  On the other hand, VW plans to boost wages from the starting $14.50 an hour – within pennies of what Detroit’s second-tier wages are set at — to $19.50 over the next three years, which would bring total labor costs to about $38 an hour.

During that time, VW is hoping to see significant increases in its sales in the U.S., with the target of 800,000 by 2018.  The maker also hopes to begin reversing years of continuing financial losses in North America.

A half century ago, Volkswagen was the name most likely to come to mind when Americans were asked about imports.  The dollar was weak and the maker could earn money on a Beetle going for barely $2,000.  Ironically, as the country was slammed by twin energy shocks, in the 1970s, VW’s grip on the small car weakened.

Initially a success, the Beetle successor, the Rabbit, failed to maintain momentum, in part due to rising costs but also because of quality problems – even as the Japanese competition began shifting their focus from high mileage to reliability.  By the mid-1980s, the German maker decided to close a problem-plagued, UAW-organized plant in Westmoreland, PA, shifting production primarily to its German and Mexican plants.

But high costs and worsening quality issues – as well as hefty Asian competition – steadily ate into Volkswagen’s sales and share.  With volumes down by nearly 80%, by 1992, the maker gave serious consideration to pulling out of the American market, but then-new CEO Ferdinand Piech vetoed that idea.

The challenge was coming up with a way to regain ground in what was, until recently, the world’s largest automotive market.  For years, VW refused to develop products specifically for the American market.  And with painful memories of the Westmoreland fiasco it long resisted opening a new plant.  That changed, three years ago, when former Volkswagen Group of America CEO Stephan Jacoby revealed an expansive growth plan that included both the Chattanooga plant and various products developed specifically for the States.

Though similar in appearance, the U.S. Passat was heavily modified for the market when compared to the recently-updated European sedan.

The strategy is “risky,” according to Aaron Bragman, of the consulting firm IHS.  For one thing, VW has been criticized for taking such “non-German” steps as switching to rear drum, rather than disc, brakes on the new Jetta. Bragman expects to see VW gain sales and share but, like many analysts, questions whether it can achieve anything close to the 800,000 target.

And that doesn’t include the Audi brand, which hopes to add another 200,000 to that figure.  Despite long-standing critical acclaim – and the fact that it is now a solid contender to Mercedes-Benz and BMW in much of the world — Audi has been an also-ran in the U.S. automotive market.  The luxury marque finally broke the 100,000 barrier last year, for the first time.

Audi’s U.S. CEO Johan de Nysschen has suggested that the brand may eventually follow its larger sibling’s model and also put a plant in the U.S.  But it appears Audi is waiting to see how things first go for VW, so such a move is likely at least several more years away.