Despite skeptics, maker “dared to dream big,” pays off $7.5 billion in federal loans. 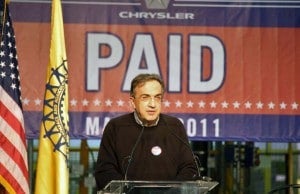 It's "the end of the beginning," said Marchionne, after announcing Chrysler had completely paid off its government loans.

Despite the “skeptical and patronizing looks” of those who placed a “death sentence on our company,” Chrysler CEO Sergio Marchionne suggested the automaker has proved it is both a viable and competitive player in the global auto industry.

The executive, who also runs Chrysler’s Italian partner, Fiat SpA, tried to maintain a low-key tone Tuesday as he announced the long-troubled American automaker had officially paid back the $7.5 billion it owed the U.S. and Canadian treasuries – six years earlier than it was required to under the terms of the bailout it received in 2009.

But speaking to an overflow audience of reporters, workers and dignitaries at the Sterling Heights Assembly Plant, in suburban Detroit, it was obvious that Marchionne wanted the event viewed as a critical transition point for Chrysler.

The Canadian-educated executive heaped plenty of praise on the White House, and particularly President Barack Obama, who decided to offer Chrysler a bailout despite significant opposition within his administration.

“We were encouraged by the fact that someone believed in us,” said Marchionne, adding “it happens rarely in life you’re given a second chance.” 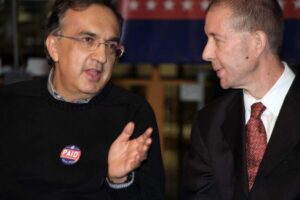 "Some, even among the president's advisors, worried Chrysler was beyond saving," said car czar Bloom, shown here with Marchionne.

In a conversation with reporters following the Tuesday afternoon news conference-cum-pep-rally, Marchionne turned his sights ahead, confirming that Fiat expects to now take an additional 16% stake in Chrysler – boosting its holdings to 46% — and that it expects to add yet another 5% by year’s end once it clears the final set in the U.S. maker’s 2009 bankruptcy bailout.  That would require it to bring to market a vehicle getting a minimum 40 miles per gallon.

Paperwork filed with the Securities and Exchange Commission, earlier this spring, indicated Fiat may boost its holdings even further, perhaps as high as 70%, a figure Marchionne declined to discuss on Tuesday.  But he dismissed some reports that the maker might now choose to forego a long-discussed public stock offering.

“We need to monetize” the remaining shares, which include the 6.6% that will still be held by the U.S. government and the stake now in the hands of the United Auto Workers Union’s health care trust.  As to timing, Marchionne would only say that he would go for “whatever is most expedient.”

Considering the current demand for automotive stocks, hammered by soaring oil prices and an uncertain economy, that could push any Chrysler IPO off until sometime in 2012, sources have indicated.

One thing is clear, after recovering the entire $5.8 billion loaned to Chrysler under Pres. Obama, the White House “doesn’t want to remain in the car business,” and would like to liquidate its holdings as soon as possible, stressed Ron Bloom, the current White House automotive czar.

Bloom, who was among the dignitaries on hand for the Tuesday formalities, also took a positive tone, but it was clear he was pleased to see a highly politicized issue turn in favor of the Administration.

“The President of the United States had a particularly tough call with Chrysler but he weighed the evidence and he showed what type of president he is,” proclaimed Bloom.

The long-time Wall Street insider admitted, however, that even he was surprised by how well Chrysler has been doing since it emerged from a crisis few expected it would survive.

Chrysler recently reported its first profit since well before the bankruptcy, and it has been gaining both sales and market share with the launch of some critically reviewed products, such as the Jeep Grand Cherokee and Chrysler 300.

But Marchionne, turning to Winston Churchill, stressed that the maker hasn’t reach the end, “or even the beginning of the end.  This is the end of the beginning.”

The choice of the Sterling Heights plant provided a particularly effective backdrop for Tuesday’s announced.  The assembly line, known as SHAP, was itself given a death sentence, one of many Chrysler factories slated to close as part of cost-cutting efforts following the maker’s bankruptcy.

“(It was) not long ago when most of us didn’t expect a day like this,” admitted Scott Garberding, head of manufacturing.  “We had to suppress our hope.”

But the Sterling Heights plant was spared when Chrysler decided to build the new 200 sedan and convertible on its line.  Buoyed by the wildly popular Super Bowl commercial featuring rapper Eminem, demand has well exceeded expectations and SHAP recently added a second production shift nearly doubling to 2,000 the number of workers on its line.