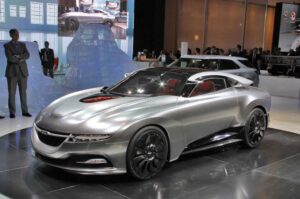 The Saab Phoenix concept shares platforms with the next-generation 9-3.

The next generation Saab 9-3 will introduce the Swedish maker’s first hybrid drivetrain, senior company officials confirmed during a conversation with TheDetroitBureau.com, a system that will provide an electric alternative to the current, mechanically-driven Saab Cross-Wheel-Drive system.

The new system will use the current Saab V6 to drive the front wheels of the new 9-3 but a motor and clutch assembly to power the rear wheels, explained company managers during a discussion of future product programs.

The hybrid drivetrain is expected to yield a number of advantages, including both improved mileage and better performance.  But it will also eliminate the need for a driveshaft running from the 9-3’s transverse-mounted engine to the rear axle.

The new 9-3, due to launch in 2013, will primarily operate in front-wheel-drive mode, several product managers explained.  But when additional power is needed, the hybrid system will add torque from the rear axle.  The electric motor will also be used under less-than-optimum driving conditions as a sort of independent all-wheel-drive (or, as Saab prefers cross-wheel-drive, system).

Using a clutch assembly, power from the electric motor will not only drive the rear axle, but will be able to be directed to either the left, right or both wheels to maintain grip.  The system also will offer torque vectoring, directing power to help steer the car through corners, whether on slick roads or during aggressive driving maneuvers.

Now undergoing testing in Sweden, the system is able to help minimize the “rebound” effect that occurs when a car starts to skid then suddenly lurches in the opposite direction, explained Peter Dorrich, who serves as vehicle chief engineer on various Saab product programs.

While Saab officials would not discuss specific technical details, there are indications the company’s hybrid system will adopt lithium-ion, rather than older-style nickel-metal hydride batteries.

Since being rescued by Dutch-based Spyker, in early 2009, Saab has been racing to put new product into the market.  That began with the latest version of the flagship 9-5 sedan and will soon be followed by the all-new 9-4X crossover.  Both vehicles use a mechanical version of the so-called XWD drive system.

They are also based off platforms developed while Saab was still under the ownership of General Motors.

The next 9-3 will be the first model to adopt an “architecture” developed specifically by Saab.  The flexible platform will serve as the foundation for other models, going forward, including the eventual replacements for the 9-5 and 9-4X.

“This is our way to get away from our dependence on General Motors,” said Saab Vehicle Line Director Anders Svensson.

The maker provided a hint of what’s in store at the recent Geneva Motor Show, where it unveiled the Phoenix concept vehicle.  The curvaceous design – described by Saab styling chief Jason Castriota as “aero-motional” – was meant to reflect on the automaker’s long ties to the aerospace industry.  While the Phoenix won’t go into production, a number of design details will reappear, according to Castriota, on the 9-3 and subsequent Saab offerings – with and without the new electric XWD system.