McBlog: On Connecting With Transits

Why our intrepid columnist has begun a love affair with Ford’s Transit Connect. 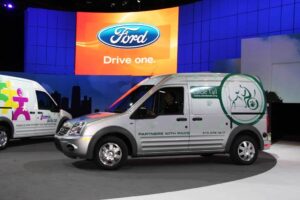 Flexibility was a major reason for the Ford Transit Connect's 2010 North American Truck of the Year win.

Odd though it may seem, I am smitten with the Ford Transit Connect.

First, there’s the name. Two words with individual meanings that seem rather specific. “Transit:” getting from one place to another. And “connect:” hooking up, joining. But together they seem like one of those oddly printed word pairs you run across on the internet — decipher and type it correctly in a box and you gain the access you seek. A sly metaphor maybe?

Then there’s the look of Ford’s Transit Connect. High in the brow. Purposeful. Busy. Replete with elfin usefulness. Over-achieving (seeming to say “I may be small but look what I can do!”). I like that in a vehicle.

And versatility. It’s a chunk of balsa wood – make what you want of it. Versatility, changeability. Those are the appealing traits of another vehicle I am drawn to, ex-Dodge now Mercedes — or Freightliner – the Sprinter. Similar character, different sizes.

The two beg you to bend them to your specific needs. Create a mobile office in their interior. Or a living space. Or tote specific things carried in specific ways. The Sage Bakery in Santa Fe, after running through a variety of tricked-out minivans and trucklets with purpose-designed interiors for wide-flung deliveries of their unique and special breads are now delighted with their new Ford van-truck transiting connectors. A perfect fit. (Mm. Think I’ll go connect with a cinnamon bun.)

Of course the Sprinter, though small for a bus, is large compared to the Transit Connect. One could actually live for a fair stretch in some neatly converted Sprinters I’ve seen.

But the Transit Connect has a multitude of specialized applications short of providing housing. I wrote Ford a detailed request for a Transit Connect rigged out to serve as a small-animal rescue wagon in Hawaii because I knew a veterinarian there who was looking for just such a special vehicle to connect with.

Ford didn’t answer me but I refuse to think it’s because they hate small animals. Or Hawaii. Or even me, for that matter. (Though I did call Ford exec Mark Fields a “wuss” in my AutoWeek column once.)

The LA Auto Show revealed that Ford has been busy-busy. Introduced there was what seems to me an obvious move: Ford has taken its charming vehicle out of its white shop coat and clad it in civvies. For general-public use is the Ford Transit Connect XLT Premium Wagon. (There’s plenty of room for even the title stowed neatly behind the two rows of seats). Five-passengers fit fine. Probably even Coneheads demonstrating the beauty of tallness. The price is a tad under $24,000.

This Ford Transit Connect lacks only one thing – a diesel engine. (The stubborn refusal by Ford to bring diesels to the US in small vehicles is why I called Mark Fields a wuss. He still is a wuss, though a rather darling one.)

IF this very vehicle had a diesel engine and DSG I would, honestly, go buy one. White for Santa Fe’s keen sun. And even if the price were two or so grand more. And even though it does lack the four-wheel-drive I sometimes need in my New Mexico back-roading in high-altitude snows. So. I mount Blizzaks.

I do love that Transit Connect.

Please, Wussy, a diesel and we could all connect.