McBlog: GM, the Volt and What I Really Want

Columnist Denise McCluggage weighs in on the rush to “electrify” 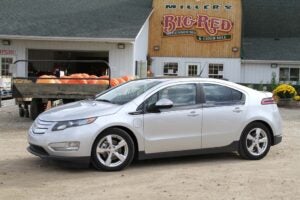 A "brilliant" bit of engineering, but is the Volt really the right solution?

The General has done so many things with a ham-fist and a diverted eye that it’s easy to pick on anything America’s automotive giant does. But the Volt is not one of General Motor’s clumsy enterprises. Repeat; not. (Although press relations surrounding the introduction of the car had some avoidable ackwardness.)

Electric. Ah, the American driving public, one of the most ignorant – well, stupid — when it comes to car matters (except for me and thee, of course), has been lit up by that word, “electric,” as if plugged into a damp socket. That and “hybrid” seem to trigger both the “I-Me” gene and the altruistic love of planet at the same time. Whee! I get to use the Diamond lane. And I’m kind and caring to my environment. Also patriotic about avoiding foreign oil. (Though that really means Canada and Mexico and not the dreaded Mideast they envision.)

That rising clamor for cars that plug-in and/or are weighted with batteries plus the related eagerness for state and nation to throw money and privileges at the folks who acquire such cars, have overridden some sober business calculations that might – if considered in quiet repose – militate against plunging so forcefully into the act of building electric cars for profit. 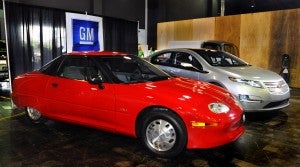 GM’s experience with the EV-1 left the business minds at the company dubious about the future of electric cars. Only in faulty memories — and a flawed movie — was the EV-1 widely popular and “killed” on the brink of glory. It was a tough sale, or rather lease, and “range anxiety” most certainly put two strikes on it in a tough ballgame. The EV-1 was not murdered; it was removed from life support and passed on.

But GM learned a lot from that experience.

Range-anxiety awareness shaped the approach of GM engineers to making the Volt a reality. How strange the silly charge (if you’ll pardon the expression) that the Volt is not a “pure” electric muddies the introduction of a highly sophisticated, cleverly devised vehicle with electric motors the chief and usually only driving force. Pooh-pooh, say the detractors, it’s a hybrid. And discuss whether it’s mostly a serial hybrid or a parallel hybrid hoping readers will be impressed with the detractors’ erudition. “Why doesn’t GM admit it’s a hybrid?” they ask. GM lying to us again…

I say pooh-pooh to the pooh-poohers. What the Volt is called SO doesn’t-matter. Look beyond what it is to what it does, to the intricate genius of the engineering and how it maximizes the function of the electric motors, the batteries and the little internal combustion engine to assure smooth efficiency and….and lets electricity furnish the final drive power most most most of the time. And puts range anxiety out to peaceful rest.

How can anyone discount the uneasiness in the uncertainty of getting where you want to go when so many variables make up the stew? The way you drive, the weather, the time of day, the terrain, the temperature? Shall we press on in the dark with no headlights, or shall we have lights and risk not making it to a plug? Shall we freeze our buns and coast the hills squeezing the last amp or give in just 15 miles from home in a flea-bag motel because it has an electric plug and a bed?

GM wanted no part of that. They did not want to put on the market something that had to be in a practical world a family’s second or third car, a city-errands runner – as useful as that might be. They wanted a car that could be that errand boy — clean and neatly combed feeding only on kilowatts and head pats. BUT they wanted that car to fill another role as well. Even without benefit of a phone booth changing room this same vehicle – kazam – could go as far and as long as traditional cars. One that would have, heavens, the ability to be an Only Car.

GM added to the plug-in electric character of their Volt what is, in effect, an on-board battery charger to guarantee peace of mind and the ability to get home comfortably in the dark and cold of a rainy night.” That is not correct. The 1.4 liter combustion engine does not, at least in its current (no pun intended) design charge the battery. Maybe if GM had actually invited me to the Volt intro I would not have had to rely on second-hand inaccurate info. I now learn that you must plug the car in to recharge the batteries. To keep the car running when the batteries have faded to inadequacy the gas engine runs a generator that provides power to the electric drive system. But you can still think of the engine as a long, retractable extension cord if you want to emphasize the electric nature of your car. Gasoline is as ubiquitous a fuel as you can find in a civilized country. So if the electric can’t serve your expanded needs on its own, the gas-engine will inspire the generator to create electricity. And this combustion engine will even, at high speeds, add impetus of its own to the electric-driven wheels. Energy synergy at work for you.

I like the way Pam Fletcher put it. Pam Fletcher is GM’s engineer in charge (that word again) worldwide of plug-in and hybrid powertrains. She said: “The story of the electric drive is really a story about efficiency. How do we take all this battery energy…and very efficiently and effectively drive the wheels. That’s ultimately what the customer is looking for, is to maximize this notion of electric range, to maximize this notion of efficiency of the generator when we have to use it.”

Sort of. So the Volt by the accounts I trust is a good-handling car. (I’m an admirer of GM’s chassis engineering – maybe Cadillac’s Nurburgring experience has had a spreading effect.) The Volt, I think, is well done and as clever as a gadget that makes roses out of radishes. However – and this is what has dimmed GM’s enthusiasm for electrics from the start – it costs a whole lot. The Volt is tagged at $41,000. That’s a skosh more than $10,000 a seat. The facts are immutable: the public’s darling “electric”, in whatever guise, may save gas and dirty air but it will not save money. Battery-power (still waiting for a breakthrough here) is damned costly. And the $7500 bribe earmarked for Volt buyers helps that buyer’s pocketbook but that money has to come out of someone else’s.

But at least the Volt, and electric cars in general, are — like golf courses, pesto sauce and St. Patrick’s Day bagels — green. Right? Hand rocking here – not Kermit green. Not when the full life-cycle from construction, through use and dismantling is considered. For one, there’s that matter of dealing with spent batteries. And, then the question of how that electricity that shows up at the plug is created. Not by scruffing across the carpet, my dear. Most likely it is generated by burning, uh, coal. Yes, that black stuff, coal. Your electric vehicle is probably running on remote-coal. That’s what gets the volts to your Volt or anything else that plugs in. Elsewhere, pollution.

What about those “clean coal” commercials on TV? Yes, clean coal is actually possible. With technology and time even coal can be “cleaned” to a more environmentally acceptable level, but the process deprives coal of its sole virtue — cheapness. (Well, there is feeding West Virginia which must, most sincerely, be considered. How without coal? Beyond the scope of this tiny space. Or imaginatiion)

All in all I’m impressed by the Volt and its engineering. And the quiet, clean prospect it suggests. But still I wish GM would consider the existing infrastructure, the existing state of the art, the existing existence – damn it – and bring to these shores one of its diesels. Torque and range is what really matters to most drivers and diesel does that best. And now. Not forever, just now. Clean diesel is real. It’s not as quiet as electric, but quieter than it has ever been. And in life-cycle costing diesel scores high. And rather green at that.

Dr. Diesel is due his day. C’mon, GM. Open your ham fists, look me straight in the eye. And give your CAFÉ numbers a boost. Offer a, say, Cruze diesel along with your Cruzin’ Volt. Or something! Please?