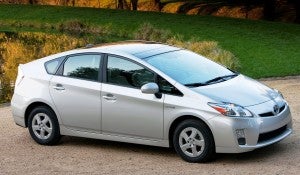 Prius remains the sales leading hybrid. It is unchanged this year after a revision last year.

Toyota Motor Sales (TMS), U.S.A., Inc., has just slightly raised the price of its Prius hybrid in an attempt no doubt to raise revenues as the Japanese Yen remains strong. Year to date the Japanese-produced Prius has posted sales of 91,940 units, down from 93,810 in 2009.

Sales in August 2010, the most recent reporting period, plummeted 35%, as gasoline prices remained relatively low and down significantly from their record $4 a squirt highs in the U.S. Some of the drastic drop in sales was due to the end of the taxpayer subsidized “cash for clunkers” program, which was in effect a year ago.

After ten years of sales in the U.S., the latest generation Prius will now have a Manufactures’ Suggested Retail Price Range (MSRP) of $23,050 for the Prius Two model to $28,320 for the Prius Five model, an increase of $250. MSRP excludes shipping and deliver charges of almost $1,000. The relative restraint used in the increase demonstrates how weak the market remains, as well as Toyota’s tenuous position in it. Nonetheless the increase is worth somewhere between $25 and $50 million in increased revenues at a time when Toyota’s post recall marketing costs remain high.

The Toyota Prius leads the market for hybrid automobiles that it started more than a decade ago. With its 50-MPG fuel economy rating, Prius is the most fuel-efficient passenger car available in the U.S. – a spot once occupied by Honda. Prius’ fuel economy comes in what’s dubbed a 5-passenger midsize car by the EPA. Toyota has sold 880,000 Prius models in the U.S. since 2000.

The third-generation Prius – new for the 2010 model year – had slightly better mileage ratings and enhanced performance. The 2011 Prius retains a moonroof with solar panels, four driving modes, a guidance parking system and steering wheel touch controls that display on the instrument panel, among other features.

The Prius entered the Japanese market in 1997 as the world’s first mass-produced hybrid – negating the conventional wisdom of German and U.S. engineers and executives that the Japanese only copy and couldn’t innovate. (The earlier two-seat  Honda Insight was too small to be successful.) Toyota’s complicated but effective Hybrid Synergy Drive System was introduced in 2004 on the second-generation Prius, another technical coup.

The first-generation Prius was rated at an estimated 41 EPA combined MPG, and the second-generation model achieved a 46 MPG EPA combined rating. Using a combination of technologies, Toyota increased fuel efficiency for the new Prius to an EPA estimated 51 MPG in city driving, 48 MPG highway and a combined 50 MPG. Mileage is especially improved in cold-start conditions and at higher speeds, according to Toyota.

In the current Prius, a 1.8-liter Atkinson-cycle, four-cylinder engine produces 98 horsepower at 5,200 rpm.  Together with its electric motor, the hybrid system generates a combined 134 net horsepower, an improvement of 24 horsepower compare to the previous generation.

Prius has been a “full” hybrid since its introduction. This means it can run on the gasoline engine alone, battery alone, or a combination of both. The Hybrid Synergy Drive was completely re-engineered for the third-generation Prius, with lighter, more efficient components.